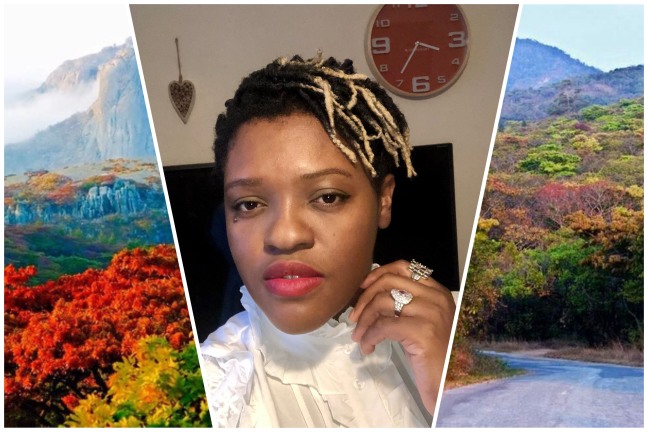 One of my readers yesterday asked me to explain why I refer to Zimbabwe as a Kingdom of Darkness and Cursed in the wake of Ginimbi’s horrific death, and why I associated his death to the darkness of the Kingdom. Their argument was that Zimbabwe is a very beautiful place.

Well, I can not deny that physically, Zimbabwe is a beautiful land to behold. She is the perfect description of tropical or is it exotic? She is a seductress by nature, that’s why she brings forth daughters who are seductresses, daughters whom Kings of East and West Africa will die to embrace. But she is evil to her children, she kills her own babies, which is symbolized by how most Zimbabwean mothers are wicked to their own daughters, always cursing them through Kutanda Botso. The culture itself is built on the wickedness of mothers, in Zimbabwe, a mother is worshipped for being evil.

Back to Zimbabwe and her beauty, I was born in the most beautiful part of the Kingdom, the Eastern Highlands in Mutare, which boasts one of the most, if not the most beautiful landscapes in this world, surpassing the iconic Scottish Highlands scenery. I was born in that part of the country for a reason, to a woman whom today I can not call mother, for it was there that she tried in vain to sacrifice me. I was able to behold the breathtaking beauty of Zimbabwe, which is even the main curse of the land. Her beauty or glory is hidden, and can never be appreciated by the world, that alone should tell you that something doesn’t add up, that even though it looks seductively beautiful, beneath it all, something is dark and eerie.

I could write a whole book, with many many chapters why her beauty is her first curse, but I would rather talk about her second curse, of what lies beyond and beneath her beauty.

When you look at Zimbabweans, in reality even though they dwell in this beautiful land, they cannot see it or enjoy it, they wallow in poverty and they see themselves as the lowest people of this earth, if you tell them that they are mentioned in the bible as a country, they will stone you, literally. They will call for your blood.

Now, this is where the curse of Zimbabwe as a country comes in. For something to be a secret, it means it’s hidden. Zimbabwe is actually a hidden country, my earthly father calls it “Kanyika kepakati kakavandika”. On a global scale, it is a very tiny insignificant country, yet it is so known and yet very unknown. There is something about this country that is very difficult to put in words. I guess the only word I can use to describe it is “mysterious”. What makes it even more mysterious is the “culture” of this Kingdom.

Zimbabwe, naturally is a country that is sacred. Its actually explained better in Shona, the native language, where the elders of this Kingdom will say “Inyika inoyera, inyika yemhondoro.”

As a prophetess of my Lord husband, the Most High revealed to me what Zimbabwe actually is, and I have always said it, that it is the biblical Ophir, now this year, Zimbabwe wants to tap into my word.

When the white man invaded this country, they had gotten the revelation about it, that it is Ophir and much more, about its sacredness, hence they turned everything upside down spiritually, they climbed every sacred mountain, they dived into the sacred waters, they entered the sacred caves, they went places were the inhabitants of the land did not dare to go, so the Mbuya Nehandas marveled at the lack of respect by the white man for the gods of Zimbabwe, but to the white man this was not disrespect, they were there to take the powers of the land…and use them in a way the inhabitants of this land had never known.

Ask yourself why Cecil John Rhodes, the greatest colonizer in the history of white supremacy chose a sacred mountain in Zimbabwe as his burial place, where the spirits of the Ndebele kings dwell in?

The beauty of all this to me as Mary-Tamar was Jean, is that the majority of the people who dwell in this sacred land have no idea, and their eyes are spiritually shut so they cannot see what the land actually is. They are not able to comprehend that Zimbabwe is actually a biblical land. But that’s not in a positive way by the way. It is a cursed biblical land. They are too busy worshiping animals and practicing wickedness and abominations that has never been seen on the earth to even understand that they are actually doing the work of the gods. The irony of it all. I guess that’s part of the mystery of the land, the people themselves are a rather wicked mystery. They love evil and call good evil.

My Lord husband always says to me, “If Zimbabweans like you, it means you are not a very good person. Consider yourself blessed if they hate you.”

So he calls me blessed.

For they are the opposite of good. When I say, they, I mean the majority of them.

Behold, the opposite of the Holy Land is Zimbabwe.

That is what I mean when I tell you that Zimbabwe is a biblical land. For the Most High Yah to create a Holy Land, there had to be a Zimbabwe first.

You see, when you want to feel the blessing of Yah, his power and anointing you go to the so called “Holy Land”. It acts as a portal to the holy spiritual realm isn’t it? This reality is the wisdom of the secret society. This is their high intelligence. They deal with portals on this earth.

So if you go to the Holy Land to tap into the anointing of Yah, where do you go to tap into the anointing of the other side? The dark side? You find a portal. And where is that portal here on earth, that lets you go into the unknown, and get all sorts of powers? That portal is Zimbabwe. This is one of the greatest mysteries of the Great Zimbabwe, and the Mutapa Empire and why it was even built. This is one of the mysteries of the Zambezi River, even the Victoria Falls, and why they tell you that the gods of the land drink and renew their strength in the Zambezi River. This is why in that land, the people worship animals and nature (totems) and have no idea where that began or why they do it, they just call it culture.

Zimbabwe Is The Headquarters Of The Marine World.

The secret society will tell you that mermaids are beautiful, they have beautiful blue eyes and long blonde hair. But there is no such thing as a beautiful mermaid, mermaids are ugly and most of them, if not all are masculine (mermans). Many women in Zimbabwe are actually wives of these mermans, especially the famous socialites and the elites of that Kingdom. These mermans are not beautiful, they have webbed fingers and are dreadful to look at, they have a Kingdom, and in the waters of Zimbabwe is their headquarters. The secret society is very much aware of this, these mermans give these Zimbabwean women money, beauty and power. You have these cliques of females in Zimbabwe, very famous on Social media, and they are not able to account where their money comes from. These women normally do not have husbands, if they have men, the relationships can not last, because these women are “married” to the “Mhondoros” of Zimbabwe, and they ritually go under water to recharge their powers and wealth and supply the power to the global elite. Some of these women are connected to world billionaires, yet the world doesn’t know them.

The reason why this is not out there in the open, or why it sounds ridiculous, is because that’s exactly how it was designed by the gods of the land. It is supposed to be a secret, hence one of the biggest secrets of the secret society.

So when I tell you that Zimbabwe is cursed, this is one of the many reasons why. And the Ginimbis and the Zimbabwean Elite, that circle, they are all part of it, and the all-white parties are not just flamboyant parties, but the modern versions of bira’s where blood sacrifices are made. I was supposed to be part of it all, I was supposed to have that glory and crown, loved and adored by Zimbabweans as their Princess, for I was born to be one of them. But today, their spirits can not even stand my face…or my energy, or my aura…for I now belong to the House Of Offeh. I am now the Queen in the North, my husband’s Prophetess.

Many a bira’s were done for me, they wanted to take me to the underwater, but I said no, when I was as little as 3 years old…

Because I was meant to live, survive it all and tell the world why Zimbabwe is what it is, for such a time as this, that it is the sacred little hidden Kindgom where the old serpent, the dragon actually fell on…

6 thoughts on “Mary-Tamar, Why Do You Call Zimbabwe Cursed When It’s A Beautiful Country?”