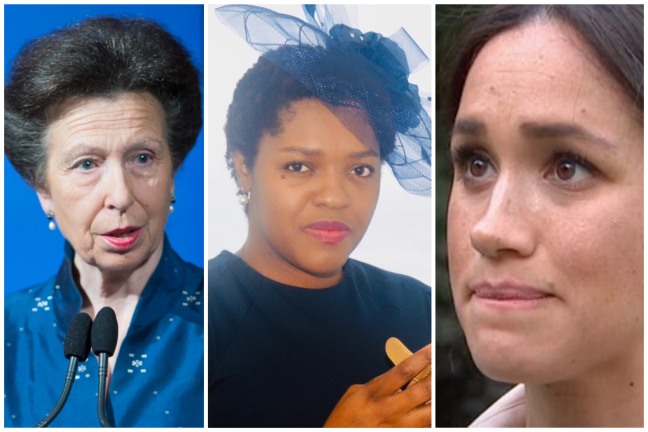 My mentor, a woman I take great inspiration from, the Mayor of Luton Maria Lovell is a black woman who is my own husband’s god mother. Maria is the leader of one of UK’s largest towns, Luton which is one of the most diverse towns in the UK. There are places in Luton where you forget it’s England, you would think you are in Africa because of how diverse it is. So I will not allow my country, where phenomenal black women like Maria thrives, to be painted as the most racist country on earth because one woman, Meghan Markle did not get her way with the British Royal Family.

I stand here today, and choose to defend a woman who equally loves her country like I do. Many people in this world do not even know her, because she always makes it a point that she stays in the background as she fights for her Family and Country. She is every inch a woman of substance and character, just like my Maria. A woman I personally admire. She has strong ethical convictions, and sometimes like me, she has to choose DESTINY over CROWN.

As it is revealed and somewhat confirmed that it was indeed Princess Anne who made comments about baby Archie’s skin tone, I Mary-Tamar will stand on a roof top today and declare that Princess Anne is not a racist. Today, her crime is loving her family and country, which in the eyes of Meghan Markle, has been conveniently translated as racism.

Princess Anne was one of the royal family members who were not keen on Meghan marrying into the royal family, because she could see right through Meghan. She sensed that this woman would bring shame and reproach on her family, so was she was rightfully concerned about her nephew marrying Meghan. Meghan and Harry dated for less than a year before they married. Like Prince William, she could smell danger ahead and warned her nephew to take things slow before rushing to marry an American unknown actress he hardly knew. These genuine concerns about a “rushed marriage” had nothing to do with Meghan having a black/mixed race mother.

Now Harry, being under the spell of Meghan, which he somehow mistakes for true love, would go to Meghan and tell her every little fine detail of the family meetings about his brief courtship to Meghan, including which family member was objecting to her joining the royal family. Meghan was given this ammunition by Harry himself, and as a vindictive woman, she knew that once she’s in the family, she would surely plot her revenge, and her greatest weapon was her “black” side.

Meghan’s revenge was set upon William and Kate, for a number of reasons, one being that William initially objected to her joining the family. Hence she bullied little Charlotte, calling her fat, making the little’s girl’s preparations to be her flower girl absolute hell. Tormenting Princess Charlotte was all part of Meghan’s revenge to William for telling Harry that “You hardly know that girl.” Her revenge plot was so strong she did not want Prince William’s children anywhere near being part of her bridal team.

All this upset Meghan caused to Catherine and William did not appease her anger, she wanted to be vindicated against Princess Anne as well, because the Princess Royale warned Harry not to marry Meghan.

So Harry being Harry, angry that his child would not be given a title, and that the Queen was not going to make any special provisions to give Archie a title, then went straight to his wife, and told her word for word of what was said in the meeting.

Now, the scene had been set, Meghan had her ultimate ammunition against the British Royal Family. Because she had never suffered ANY actual racism in the family which bent backwards to accept her, even when other family members objected to her joining, Meghan knew she had NOTHING on the royal family when it came to race. So when Harry came with the fine details of what was said in the family meeting, Meghan rubbed her hands, because now she had it!

If anything Harry is a TRAITOR, what he has done to his family all in the name of pleasing a woman is beyond shocking. He did this because of his jealousy towards Prince William, but in time, he will live to regret selling his family to a Jezebel.

Now back to Princess Anne, as I said in the beginning of my essay, she is a woman I admire, because she is a woman of character and substance. This is a woman, who declined royal titles for her own two children because she wanted them to have a normal life. Her daughter, Zara is the first granddaughter of the Queen, born 6th in line to the throne, born qualifying for a title, yet Princess Anne chose DESTINY over CROWN for her baby girl.

When Princess Anne declined titles for her children, she was not despising the monarchy, or shunning royal life, but she wanted to give her children the chance to choose their own destinies, which would be limited had they had titles. And “Princess” Zara proved her mother’s instinct was right, she is a fun life loving hard working British citizen, who makes her country proud in the world of sports, without riding on a title, rather she rides a horse in her own right, her destiny.

Princess Anne, probably the hardest working royal, is never given the praise and admonition she so deserves. Her children, especially Zara, are a testimony that their mother is a humble woman of admirable character.

Now if I am to choose between the testimony of Meghan Markle, a woman with a reputation of lying, bullying, manipulation and disrespecting her husband’s family or Princess Anne a woman who puts her children’s happiness first and goes around the world serving her country without cameras in her face, whose testimony will I believe? When Princess Anne goes to Africa we don’t even know she’s there, unlike Meghan who goes to Africa and invites a TV crew to make the trip all about her, of course I will choose the testimony of the woman whose own life speaks of her integrity.

So I stand here today, testifying as a black woman that when Princess Anne wondered what colour of skin Archie would have, that was her just being human. Don’t we all wonder, what our babies will look like, black or white?

I challenge any black person who has never wondered what shade of black their baby would be to be the first to throw a stone at Princess Anne. Black people are even more “racist” in their community towards babies born with darker skin. I find their outrage towards Princess Anne so hypocritical.

As a mother of dark skinned children, I have experienced inhuman cruel remarks about my baby’s dark skin from my own family. My own older brother who lives here in the UK, once looked at my dark skinned baby and frowned with disgust, asking me to explain to him why I had given birth to a very “black baby” as he put it. On social media, I have had Zimbabweans mocking my baby Charo, who is my most melanin blessed baby, that she is way too dark. I have had Zimbabweans on Facebook call my husband inhuman names, like “ape” and accuse me of “bestiality” saying how can a woman like me sleep with a man that “DARK”. They write in native shona, so I can never report these comments to Facebook. I can not explain the pain I have endured, sometimes I have cried, reading the comments from Zimbabweans, who look upon my husband and daughters with disgust because they are dark skinned.

Below are some recent Facebook comments from Zimbabweans expressing their disdain towards my husband’s dark skin, the language is extremely foul and offensive but I can never report it to Facebook as they write in Shona, Zimbabwe tongue.

So when I see these Zimbabweans, the same who torture me for having a dark skinned husband and dark babies, being outraged that “A member of the British royal family was supposedly concerned about Archie’s skin”, my blue black brown skin crawls at the sheer hypocrisy and wickedness of these people.

Both Meghan and Harry know the reason why Archie does not have a title, he is simply not entitled to one, nothing to do with his skin colour, which is WHITE by the way. The funny thing is that when Meghan was pregnant, both her and Harry insisted that they didn’t want the title for Archie anyway, because they wanted him to have a normal life. I remember reading that somewhere. Another funny thing is, even black people wondered what skin tone Archie would have, they prayed he would come out BLACK, black like my baby Charo, so they would feel relevant that a white Prince and a mixed race white looking woman had birthed a “black” royal baby.

So may the Lord God expose the hypocrisy of the black people who support Harry and Meghan, throwing stones at Princess Anne for being a racist when they are far worse at being “racist” to their own kind. May the Lord God vindicate Princess Anne, whose words and sincere actions have been twisted by a manipulative woman set to destroy her kingdom.

May the Lord God expose the deception of Meghan Markle…

The Genesis of The Revelation By

18 thoughts on “I Defend Princess Anne, Who Is Not A Racist, Against The LIES Of Meghan Markle”