I don’t believe in reincarnation and I certainly do not believe in the transfer of the spirits of the dead to another living soul but the Duchess Of Sussex is a mirror reflection of Princess Diana.

One may wonder why Prince Harry chose a woman who comes from a dysfunctional family, abused by her half-siblings during childhood, and a loner.  As I look at how her journey is unfolding, she is somewhat a reincarnate of Prince Harrys’s first love, Princess Diana.

After Princess Diana’s tragedic death, there were a lot of conspiracies which pointed that her death was not just an accident. I believe that Princess Diana’s restless soul somehow seeks for justice and Meghan is the woman carrying her flag.

It wasn’t surprising to me when I heard Meghan’s pregnancy became the most talked about news around the world two days the royal wedding of Princess Eugenie. Even though she is referred to as the commoner from a dysfunctional family, her wedding was the most talked about Royal wedding compared to that of Kate Middleton and recently Princess Eugenie. Could that be some sort of revenge?

When I read about the tension that Meghan’s pregnancy announcement created at the recent royal wedding, I said to my Boaz, “That wasn’t very nice, Meghan should have not announced her pregnancy at Eugenie’s wedding.” But Boaz said to me, “No, Meghan is simply fulfilling prophecy. Power is about to be handed back…”

I feel like Meghan knows what she’s doing, and shes set to become the most talked about Royal of our time, just like Princess Diana was.

Paul Burrel, Princess Diana’s former butler has called for Harry and Meghan to name their baby after Princess Diana if its a girl. He said, ‘It would make the late Princess so proud.’ Well, I totally agree, I hope it will be a girl too so we can have a little Princess Diana.

Well, here are some similar characteristics of Meghan and Diana.

BOTH MEGHAN AND PRINCESS DIANA ARE PEOPLE’S PRINCESSES

Meghan and Princess Diana are both peoples princesses. Princess Diana travelled around the world and everyone loved to be around her because of her humility. She saw herself as ordinary making it easy for her to understand and relate to people. They are both warm and approachable.

It was in Australia that Princess Diana made her mark as the people’s princess, and right now as Meghan is in Australia, she has won the peoples hearts.

MEGHAN AND PRINCESS DIANA BOTH CAME FROM BROKEN HOMES

Meghan comes from a home where the mother and father are divorced. She has also been publicly humiliated and shamed by her two half-siblings.  She reminds me of the Black Shunammite woman that King Solomon loved. This has shaped her way of thinking and how she behaves.

Princess Diana’s parents were divorced. The divorce was finalized in 1969. Her parents’ failed marriage had a resounding effect on Diana. Diana’s broken home made her feel different from her classmates. Divorce was uncommon at that time in England.

DIANA DEFINED THEIR OWN RULES AND OFTEN BROKE ROYAL PROTOCOL, MEGHAN IS KNOWN AS A FREE SPIRIT WHO IS CONSTANTLY BREAKING ROYAL RULES

On her wedding day, Meghan gave a platform for the world to know how talented Black people are. She made her wedding so special and unique by introducing Black Cello Classical player Sheku Kanneh-Mason who reminds me of King David on his harp. Also Meghan invited The Kingdom Choir, a Christian gospel group based in the South-East of England to perform at her wedding. .

She wore the simplest wedding gown and tiara. Everyone was waiting for a very complicated gown to please the paparazzi but rather she chose to identify herself as the simplest naive princess.

Meghan Markle wore the Queen’s least favourite fashion item to the beach in Australia, where she broke royal protocol by removing her shoes.

Diana picked her own engagement ring from a catalogue. She wrote her own vows and sent her boys to school. She exposed her kids to a non-royal way of life. She talked frankly with the press and refused formality.

Anyway, still talking about Meghan, When I changed my name from Jean Gasho to Mary-Tamar a few weeks ago, I went shopping for a new wardrobe, as I needed to be completely myself. I took my daughter Nakai with me, and when I picked a white Ralph Lauren dress, my daughter said to me,  ‘Oh, Mum, this is the kind of dress that Meghan would wear.’  I said to my daughter, ‘No, darling, this is not Meghan Markle’s style, it’s Lady Mary-Tamar’s style. It’s the kind of dress that I would wear.’

Well, my daughter was kind of right,  a few days ago Meghan showed her pregnancy bump for the first time in Australia in a similar dress to the one I had picked weeks before.

DIANA LOVED CHARITY WORK AND SO DOES MEGHAN

Meghan does not only share the same fashion sense as Princess Diana, but she is also passionate about charity work too. 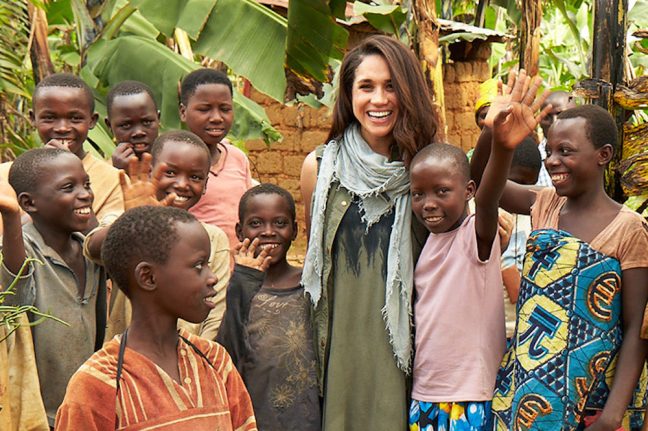 From how I see things, there will be a great shift of power coming in the British monarchy and I wonder where Meghan and Harry will be. I won’t be surprised if the Royal rules will be broken and the Duke and Duchess Of Sussex become the King and Queen. I also won’t be surprised if a different  Blueblood will rise from nowhere.

2 thoughts on “Is Meghan Carrying The Spirit Of Princess Diana To Change Royal Destiny?”