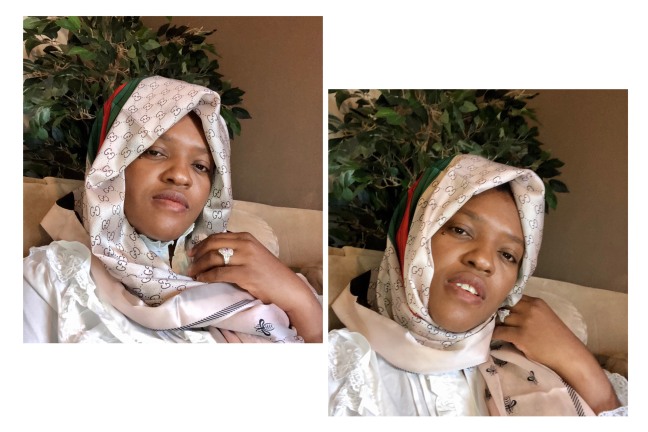 So I got asked this question by one of my lovely faithful followers last week after I had posted a luxury scarf and bag that my husband got me. I guess my readers are wondering if my husband’s concubine and my handmaiden Shulamite also gets the same treatment and if shes showered with luxury gifts like the King does to me, his most beloved Queen.

Okay the answer to that is yes and no.

Shulamite is a handmaiden first, then a concubine second, then a “wife” third. Yes, a concubine is a wife, but a wife of a lesser social and spiritual status. So Shulamite is not a Queen, she is a maiden to the Queen. So she can never have any treatment that is equal to mine. That is wickedness and an abomination in the sight of God. King Solomon who had a Harem full of a 1000 beautiful mostly black women, only had one Queen. And he told us in the book of proverbs that the earth can not even bear the wickedness of a maidservant who displaces her mistress….the Queen

In the pagan land I was born in, I grew up seeing a lot of Zimbabwean men do this wickedness and abomination, they took handmaidens to their own wives and made them first wives and put their wives away. I remember feeling very emotional each time I saw or head such a case. We even had a neighbour who had displaced her mistress and was now looking after her mistress children as a very cruel stepmother. The story made my stomach turn. Growing up, I knew at least 5 women who were handmaidens and displaced their own mistresses. It is wickedness.

The King, my Boaz and husband, who has the same wisdom and anointing as his fore father King Solomon, fully understands that it is an abomination for his concubine to be treated the same way he treats me, so he will never buy Shulamite the same luxury gifts he showers me with.

Shulamite herself fully understands that she is my handmaiden first, I gave her a husband. I am the one who put the King in her bosom, for this reason alone she bows to me. So she will be a wicked woman to think she can wear more glorious robes than mine, or that she should get the gifts I get from the King.

It’s a shame that women of today, even those in polygamous households can not grasp this truth and principle. The men too can not grasp this truth. There is a famous South African polygamist who goes around buying the exact same luxury gifts for his four wives, he buys them the same cars, the same clothes and everything. King Mswati also runs his harem like that, I mean put the spiritual aside how boring and dull is that.

Men who do that do not know their wives or concubines individually. Men who buy their wives the same gifts do not understand their women personally. A man with many wives has to know each woman individually, what she likes and what she hates, and buy each of them gifts according to their personality and hierarchy. Buying them all the same cars is embarrassing. In my opinion, that man is not only lazy in material things, but he is lazy on the marriage bed too, a man like that will be treating all his wife exactly the same even in their bed chambers…he wont even understand that they have different bodies, different desires and want to be pleased differently…

So putting aside that I am the Queen, and Shulamite is the handmaiden and concubine, she is also just a WOMAN. She has her desires, needs and wants. She likes certain colors and doing certain things a certain way. She has her own style of clothing. The King knows her like that. He understands what she likes, what makes her happy, and what upsets her. He is after all, her husband. So he also blesses her and showers her according to who she is. Shulamite loves going to sleep in hotels with the King, the King always stays with me at night, but now and again I sacrifice and allow her to go and spend a night with the King, and each time she has that night in a hotel, she feels like she has won the lottery, she will be so happy for weeks.

Her dress style is very different from mine, she is more urban and street but I love my Victorian and vintage clothes. I love traditional things and neutral colors. I love heads-caffs and long dresses.

Like the King recently bought me this glorious night gown/dress, this is according to my taste, its vintage, so he can’t buy such a gown for all his wives, it’s only for me because he knew I would love it.

This is the secret of polygamy a lot of men can never understand. The secret is making every woman happy and loved on her own level. The secret is making every woman understand her place. I don’t see sharing a man as a big deal to be honest, I value love more than sex. There is nothing which would hurt me more than my husband withdrawing his love from me because of another woman, and he understands me like that, so if there is another woman, he actually loves me more to keep me happy.

So anyway, the King will buy Shulamite clothes that are to her style, though she is not as showered as me, she is showered. And the funny thing is, I am starting to change her mind on her style of clothing, she is now telling the King that she would also like some head-scarfs.

And I don’t mind Shulamite copying my style, as long as it is not to upstage me, she can copy me. I should be her greatest inspiration after all. I am her Queen.

So does she get showered with gifts like me, I guess the answer is both yes and no…

But the most important thing is she is happy, and knows that she is ever so blessed to be a handmaiden, yet have a husband who is so loving, and a mistress who treats her like a friend and sister…