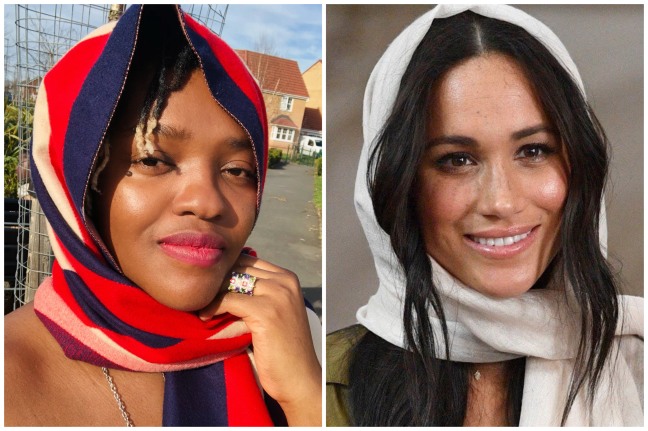 Ok, so I wrote quite a bit about Meghan Markle’s interview with Oprah as I tried to touch on most of her blatant lies which I detected but I deliberately left out the “suicidal” bit because when Piers Morgan left GMB because he said he didn’t believe she was suicidal, I knew this was a subject I could not touch at that time so I chose to be silent about it, till the fire died down at least lest her black followers stoned me.

But as I mentioned in my previous Meghan Markle articles, I do love writing about her because she’s the perfect gift for writers like us, love her or hate her she is quite an enigma. So as I continue my series on the gift that keepeth giving, I think it’s now safe to have an opinion about her “suicidal” revelations. Not many people will call her out on the suicide bombshell, but what I love about writing about Meghan is I am pretty much qualified to CALL HER OUT for all her LIES and attention seeking syndrome, because all the things she desperately uses to be relevant, I have walked the walk, 100 times more, which is what really pisses me off about her I suppose, but at least I can write about it all. When it comes to “Not wanting to live anymore” as she put it, I’ve been there, three times I attempted to actually not live anymore, including when I was only a child. As for the thoughts, that was part of my life for over half of my life, given a choice I would have rather been suicidal in a royal palace full of servants. So yeah, I am the one to talk, just saying…in fact at one point I was so suicidal the only thing that saved me was conceiving my daughter, and having her gave me HOPE in life.

Now as for Ms Markle, I do not believe she was ever suicidal at all within the palace walls, the reason is because it’s very hard to take someone seriously on anything at all when they are a serial manipulative liar, with a clear history of their lies even captured on their BBC engagement interview. If I remember correctly Meghan lied that she DID NOT know who Prince Harry was before she had a blind date with him. If someone can boldly lie like that in an interview broadcasted to millions of people across the world thinking in their head that they will get away with it, surely there is no limit to the lies that person can tell to the world to get their way. I grew up in Zimbabwe without a Television, there was no internet, but I bloody knew who Prince Harry was. How much more Meghan, an American actress, a blogger in the first world and a woman very hungry to be famous in England. Please.

Now as I mentioned before, I am the last person to even joke about suicide. But because I am not privileged like Meghan Markle, I come from an African country where if you are suicidal, you do not get sympathy from the world or a tissue from a billionaire, you will be severely chastised for it and be called demon possessed. I remember telling Zimbabweans through my blogs that when I was 16 I told my mother that I wanted to die, and she told me straight that, “Go and die, don’t do it in our faces, go far far away in a forest, and hang yourself there, so that no one even finds you, and even if someone finds you, you will have rotten by then, and if you think we will be miserable without you, we will only cry for a day, and life will go on. So go die, and don’t tell me about it, because I actually don’t care!” Those were the words of my mother to me, when I was just a child and suicidal, and when I shared my story to Zimbabweans, they mocked me without mercy. But I still spoke my truth, even to my children, that one day when I was a child in Zimbabwe, I took rat poison, and tried to drink it, but it was so bitter, I couldn’t, but as I held the rat poison bottle, a thought came to me, and I said aloud, “No I will not die, not today, I will go to England one day, and there I will be someone, and my mother will see it.” Again when I wrote all these things on my blogs, Zimbabweans attacked me viciously, and said I was evil for exposing my own mother, and God would curse me.

Then today I see the same black people who mocked me for sharing my story of being suicidal be the very same people who are calling Meghan brave, and literally weeping on her behalf. Black people are ready to go to war with the British Royal Family because of Meghan Markle, their Queen as they call her. Yet they will abuse and mock a fellow black woman who has a suicidal story far worse than that of Meghan. Can someone black help me understand that, I guess not…

And the irony of it all is that Meghan Markle is their Queen because she married a WHITE PRINCE. Had she married a black Prince from Eswatini Kingdom in Africa, black people would have nothing to do with her, she would have had no adoration or worship from them, but today she has the Beyonces and Jay Zs, the Gayle Kings, the Oprahs and the Tyler Perrys at her feet because she married into the British Royal Family, that’s her POWER. And that power was so bad she didn’t wanna live anymore…now all of a sudden, to black people, Meghan Markle is now the face of what it means to suffer in life…I roll my eyes.

Ok, I get it, life is not only tough for peasants in poverty struggling to put bread on the table, but life can also be pretty tough in the royal palaces, especially Buckingham Palace, and yes it must have been very difficult for Meghan to adjust to royal life and lose her independence, but what was she expecting marrying into the most institutional…oh sorry she knew nothing about the royal family before she married Harry, so yes I guess everything was quite a shock, especially that she had her passport ceased yet she was still able to fly around the world like no other average person, even late in pregnancy, including jetting to the USA for a lavish baby shower that average women can only dream of.

So forgive me if I have no ounce of sympathy for Meghan’s so called “suicidal” revelation. I do not believe her. I hate hypocrisy, it goes against my DNA. I can not stand a privileged white woman, she is 80% white, who uses “suicide, racism, her own son, a miscarriage”, and God knows what to push her twisted agenda of wanting to dominate the world. The fact that she has to resort to playing the RACE and SUICIDE CARD to achieve her goal makes me sick. I never thought it’s even possible to use the “suicide card” until Meghan Markle. What a mockery she makes of victims of a cruel harsh life. What a joke she makes of women like me, women who have so suffered in life to the point of utter despair where you don’t even have a shoulder to cry on, let alone friends and millions at your disposal. If she can play the race card, she certainly will play the suicide card. She may be able to fool the entire black race, but she is not fooling me.

The Genesis of The Revelation by