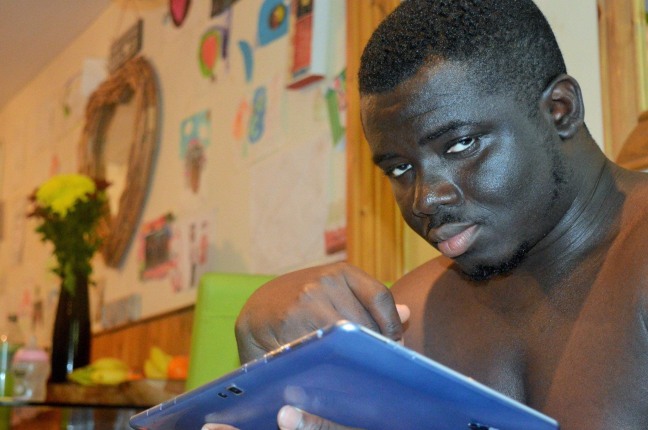 As the world celebrates the so called Black History Month where black people try so hard to be loved and accepted by white people then call it Black History, I see the real black history unfolding before my very eyes, in my household, and now even many women come to me to testify and say…

“Behold the King, please ask him to bless us too…”

That is black history unfolding…

Real black history began 6 years ago when I first met my husband as a damsel in distress, a woman in need. I was told by my Ghanaian heath visitor that time, 3 weeks after giving birth to attend an event my husband was performing, because she prophesied that I would meet someone there who would change my life.

Surely for those who have followed my story for the last 7 years, its all been on my online diary, you can clearly see that everything that has happened in my life is not ordinary, I am talking to those who have eyes to see.

Nino was actually brought to me by God in such a powerful way, within a space of 6 months, I had three powerful people prophesy his coming into my life.

After the night I saw him perform, I am the one who wrote to him on Facebook, opening up to him that I was going through a painful divorce involving a fool and had lost my home and everything, and I told him that his performance had touched me, and brought some soothing healing to my spirit so much I cried when he had sang, and he responded to me and made a prophecy that within no time I will be happy and smiling again as my husband would be home, and he said God had instructed him to sing like he had never sung before, because he knew someone out there needed to hear that healing voice.

At that time I never saw him as a future husband, but I actually saw a man of God in him, and I reverenced him and clung to his words that my husband was coming home to make me happy, so because of my faith in his words as a man of God, I drew him, and blessed him for blessing me, because all I could render to him was the gift in my hands, my pen and pencil, and when he received my gift, that was my breakthrough. I could feel the power of his words manifest in my life, and I could not help but bless him.

It was exactly like the story of Elijah and the woman who saw the man of God in him when her own fool husband saw nothing and she confessed, “Now by this I know that you are a man of God…and the word of the lord in your mouth is the truth…”

The beauty of my life is I always have those who see and believe in what I see. They write to me always, and anticipate what it is I see.

And its truly amazing, that just as I saw the man of God in Nino, just as I saw the King in Nino. Many women are beginning to see and believe that which I saw. So they write to me, asking me to pass their prayer petitions to the King.

It is women who hail a King first, that was the story of King David, the ancestor of my husband, long before King David sat on a throne, when he was just a vagabond, living rough in the wilderness, homeless and all, it was women who saw the King in David when he looked nothing like a King. In fact Abigail saw a King in David when her own fool husband called the future King a slave because he was hungry and homeless. In fact David was asking for food when he met his beloved prophetess Abigail who was able to prophesy that David would be the next King when all odds was against him. And to strengthen his future claim to the throne, David took Abigail as his wife.

That is why it was women who made King Saul fear that David would overthrow him, because they were the ones who saw the anointing on David, and sang, “Saul has killed his thousands, but David has killed tens of thousands.”

Because of those women praising David, Saul sought to kill him and he knew his reign was about to end.

Women one way or another play a vital role in claiming of Thrones, or rather in the Game of Thrones, and my Boaz needed me as his prophetess to become the King of The North.

Many people hate my husband, especially black people, Zimbabweans especially, they are very much bothered by his dark skin, because if you can not see his anointing, you have no choice but to hate him. A true King will have many enemies, but will also have many who will be willing to die for him.

David was such a man, he lived all his life surrounded by blood thirsty enemies, he was mocked, scoffed and insulted constantly, but he warned his servants never to stop people from mocking him, because that is how he got his blessings from God.

This is a lesson the King has always taught me, that let the scoffers mock, our father David had way more scoffers than us, yet he was the greatest King to walk this earth. The more they mock, the more God opens the floodgates.

We are now entering a time in history where there is going to be a rebirth of the original people of the Most High. And the Covid 19 plague is actually ushering the world into a new dispensation. Things are never going to be the same again, in so many dimensions and aspects, both physically and spiritually.

What people do not understand about history is that when it is being made, no one knows its history. History is not having four black women appear on Loose Women, it may make the headlines and be called history, but that is not history, its pitiful and pathetic.

History is not having the first black this, and the first black that. History is when Tamar chose to pose as a prostitute and sleep with her father-in-law to redeem herself. History is when Rahab took in the spies and saved herself from the curse of whoredom, history is when Ruth disowned her own people for her mother-in-law, history is when Bathsheba bathed on the roof to capture the attention of the King, and the biggest history was when the Queen of Sheba set off to meet King Solomon, and caused the King to fall. These women didn’t go out and say, “Hello we are now making black history today,” whatever black history is. History is the black women who did things that changed the direction of the winds, yes all the women I mentioned were black.

Black History is what is happening today in the House of Offeh before your very eyes, but you are not able to see it. But there are those who see it, especially the daughters of the Canaanites, they are the daughters of the Rahabs, Ruths and Tamar’s. Even though they are pagans, they can see that a true King of Israel has been re-born, because the Davidic dynasty fell with Solomon in the hands of Queen of Sheba.

And I am so excited about the future, because as the King conquers the North, when I say conquering I mean taking over and claiming his throne and rebuilding the walls of Jerusalem, which is being acknowledged in the land by the elders, I believe his reign will indeed deliver a lot of black women, as Christ’s reign on earth also blessed black women first, especially Mary Magdalene, who was also a black woman…

As we enter into this new dispensation of real black history, what is happening today is actually history unfolding, because I have women who come to me and ask for prayers from the King, and some are indeed delivered according to their faith, for those who refuse to let their Canaanite pride prevent them from seeking their own deliverance will indeed be delivered…that is black history…