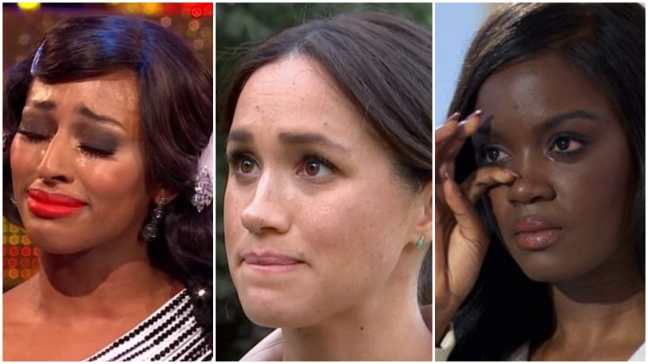 I am a black woman, and it is within my right to say this, I believe without a shadow of doubt that black people are cursed. I think collectively, they are not normal, there is something seriously wrong with black people’s mind. When I say black, I do not mean mixed race people, or Asians, I am talking about those people who are black, with kinky hair, who look like me, or the Negros as we were sadly labelled by  our former masters.  I am talking about black people of African origin.

When I look at black people, and how they think, how they function and how they reason, I feel like I am in a horror movie, and I really want to get out of this horror movie. And I often ask God the creator that why am I one with a people who are like this. I find myself unable to think black or act black, the things which excite black people makes me sick.

Yesterday when I wrote my article about Meghan Markle not being a victim of racism,  from the responses from Black people on Facebook groups and all, I found myself thinking, “Lord, they are mad these people they are, proper barking mad, and they don’t even know it. Whoever bewitched black people and cast this spell on them doesn’t have mercy surely, or do we deserve to be savages of the mind, I wonder.

Right now, to black people all over the world, especially in the United Kingdom, Meghan Markle, a woman who is not even black is now a symbol of what racism looks like in the UK apparently. If you are black, and you don’t happen to like Meghan, or if you do not think she is a victim of racism, you are actually a traitor and the devil to black people.

I have never seen black people so united. Meghan Markle has single-handedly united the most divided race on this planet. Today black people are united like they have never been before, as they cry out bitterly in one voice about the racism faced by Meghan Markle. A woman who lives in a white world, who benefits from being the seed of a white man is now the biggest race victim since the world began.

When it is Serena Williams being racially abused like she does each time she steps on a tennis court, Stormzy can never possibly call Serena Williams a “Sweet Black Woman” and come to her defence so boldly and aggressively. I bet you a million dollars, he will never come out so viciously to defend a real black woman facing racism. Serena Williams is called a man, there are You Tube videos out there, she was reduced to tears in front of the entire world, and there was no outrage like we see today from the black community, and Serena Williams is one of the most famous black women in the world, and probably most talented too, yet her pain and anguish in the Tennis world has never moved black people the way Meghan’s “pain” has.

Coming back to the United Kingdom, you have Diane Abbott, a black woman who has bent over backwards for years in vain for the betterment of her own people. A black woman who works so hard to make the lives of black people better in the UK. The British mainstream media hates her. I mean they are vile towards Diane, they mock her relentlessly, recently at the elections, a Photoshopped picture of her wearing odd shoes was printed in every mainstream British paper, yet when it was proved that the picture was fake, the media didn’t make any noise to correct the mockery they had printed, yet Stormzy will never come out guns and blazing and say Diane is a “Sweet Black Woman.” Diane’s hard work and efforts to liberate black Britons has never been enough to have the entire race rally behind her and cry from rooftops the way Meghan Markle is making them cry. They portray Diane to be thick and stupid, of which she is not and somehow they justify hating her because she is allegedly “thick”, yet if a white woman is thick, it is actually seen as a compliment, remember Jade Goody and Helen from Big Brother.

Then there is Alexandra Burke, a black British woman who once went on one of those dance reality TV shows in the UK. She was attacked daily in the media during her entire participation on that show, I remember reading what the British Media was writing about her and I was thinking how on earth can they be allowed to treat a woman like this, a black woman who was grieving the loss of her mother. The racism was loud and quite cruel. And not once did I ever see black Britons unite to fight Alexandra’s corner. Stormzy didn’t come out guns and blazing defending this defenceless black woman and calling her “sweet” as she was eaten alive by the mainstream British media. Dr Shola Mos-Sholgbamimu certainly didn’t fight for this crying woman the way she is fighting for Meghan.

There is a reality show in the UK called Love Island, my 15 year old daughter is addicted, and she forces me and to watch it. She wants to discuss it with me, so I have to watch it, I then force my husband to watch it with me. The show is disgraceful really, because it is without a doubt the most racist show that is out there today. I have no idea how and why black women apply to go on this show, because the show is designed and aimed at humiliating black women, and by black women I mean the ones who wear wigs not mixed race women. Mixed race women do quite well on that show. But each black woman who goes there is totally humiliated and made to feel like she is not attractive enough. Black women on there are never picked, even by black men. They are not given air time either, they don’t get to speak at all, we wont even know their personality because they just cut them out. Even my 15 year old daughter acknowledges how badly racist the show is, and she believes black women should not be going on that show. But I know that Love Island racism will never spark a riot among black people. No Stormzy will ever come out and call those poor wig wearing black women on Love Island “sweet”.

Then you have the Apprentice, I remember  a black woman called Joanna Jarjue , yes she wears a wig too, and she was portrayed to be angry and difficult to work with, yet it was obvious that it was the work of the editors of the show to portray this intelligent young black woman as angry. Yet cases like that of clear racism in the UK are never enough to unite black people, they don’t even notice the racism. No Dr  Shola Mos-Sholgbamimu will go on ITV to speak for Joanna. She has to do that by herself, and cry by herself on national TV, telling her open ordeal. No Stormzy will come to her defence and call her sweet, yet she really is a dark skinned sweet looking woman.

And yes I keep mentioning wigs when I talk about Black Women, because they are the only women on this planet who do not wear their own crowns. And the reason why black women, real black women cover their crowns in the first place is the result of colonisation and racism. Black women over years have been made to feel that their own hair is not beautiful enough. Mixed race women like Meghan Markle do not have to wear wigs. That alone differentiate them from the black woman and her real struggles, in the real world, mixed race women are seen as more beautiful than black women. Biracial women are often complimented for their “gorgeous” hair, whilst black women are forced to cover their coils with wigs to fit in the narrative of beauty.

The reason why black men see Biracial women as more beautiful is actually because of the white in them which causes “better” hair and “lighter” skin.

Black women envy mixed race women, and see them as the ideal. They wish they had the hair of biracial women, the bigger softer curls and the lighter skin. They also envy biracial women because they are the women often preferred by black men, and are picked over them. So yes, black women will love Meghan Markle like they have never loved another black woman before.

If anything, the outrage and outcry of Meghan Markle’s so called racism proves the self hatred of black people. It proves that they are not a normal race, they loath themselves and would rather be white, actually would rather be mixed race because they will get to enjoy being called black whilst living in white privilege.

For Meghan, she is in a far better place than any black woman can ever be. She has the protection of Harry, one of the most privileged white human beings on this planet. If you want to know what white power and white privilege look like, you only have to look at Meghan Markle’s white husband, a British prince. There is no power that exceeds the power Harry has today. So this Damsel in distress, Meghan Markle is in a way better position in life than any of us, the real black people. She has the privilege of running away to Canada,  when things don’t work out for her in Britain. She has the privilege of being offered a mansion by a white billionaire so she can at least cry in a mansion. That can never happen to a black woman, when black women face racism, they have no Canada, or Billionaire Mansions to flee to. They have no elite powerful Hollywood gurus behind them. Like Diane Abbott, they still have to wake up everyday, and face racism without any outcry or anger or support from their fellow black people, especially famous black men like Stormzy.

This has shown me the wretchedness of black people, I always knew that black people were cursed by Noah, but Lord, I never knew that the curse would be permanent like this.

Meghan Markle has proved the madness of black people. She has single-handedly managed to bring out the worst in black people. Their desperation for white validation and approval. Their self hatred and how they will unite and bend over for anything that is not fully black.

I feel physically sick coming to the end of this article, I am one with people who live in a sunken place, and they don’t even know that their minds don’t work.

I am a bit angry with Noah, did you really have to curse the whole race…because of the sin of one man? Really?

Yes I know not all black people are descendants of Ham, but Lord don’t we all act like it…