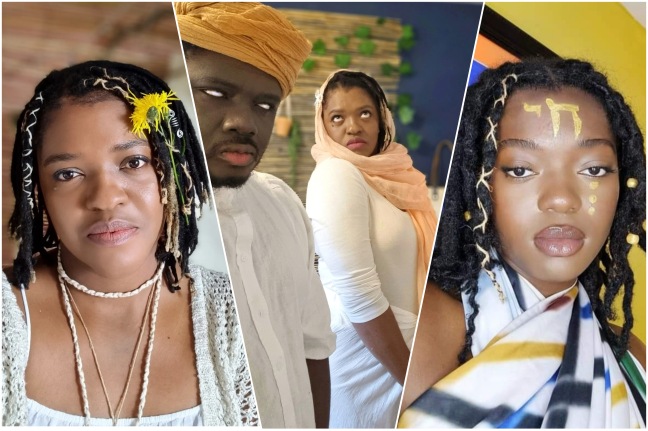 So recently it came to my attention that in Ghana on the underground there are rumours and whisphers that I bewitched my Ghanaian born Lord Husband Atehene. The Ghanaians are saying his awakening from the Seventh Day Adventist Cult, him marking his face with the chai sign of life, him calling himself the MESSIAH, the way he now dresses, and him speaking in a Northern Kingdom tongue is a result of me, Mary-Tamar bewitching him and casting spells on him.

It’s truly amazing that Ghana didn’t really have a problem with me being with Nino until my Lord Husband started becoming himself, and connecting with his original identify. Until he became the Messiah of the Free Worshippers and denounced his Seventh Day Adventist upbringing, the Ghanaians didn’t really have a problem with him. Yes there was a few Ghanaians over the years who marvelled at why a young Ghanaian man would fall for a Zimbabwean born single mother of four. Some would say just use her and leave her, but testifying the truth before the Lord of Sabbath, the majority of Ghanaians were extremely warm and supportive of my Union with my Lord Husband, so much when he proposed to me when I gave birth to my 7th baby Chaniya, our love story made the Ghanaian headlines.

It was in the last year that everything changed. In November last year, the winds blew, and the tide changed direction. My Lord Husband and I went through a very fiery furnace, where our loyalty and love for each other was tested by fire. It was a moment that was supposed to break us. It was a moment that was meant to end our love story before it had truly began. For a moment in that fire, our hands slipped off each other, and we lost our way. In a twinkling of an eye, we went our separate ways. I remember thinking this is really it, Nino and I can never get back together. Never ever. It seemed we had reached a dead end of no return…

I remember sitting on the bed, talking to my 18 year old daughter Nakai, so distraught, and I said to her, “This is it Nakai, there is no going back, Nino and I can never be together. Not after this…”

“No Mum.” She said, looking into my eyes with so much conviction. “I have faith,” were her exact words. I looked at my baby girl. She had the faith that I had taught her for 18 years. She was that young woman of virtue and perseverance I had always prayed she would become.

“This is not the end, Nino and you will be together again, somehow, eventually. You are meant to be together.”

I remember her words going deep into my spirit. Somehow I hanged on to every word she said, because deep down I loved my Lord Husband so much, and never wanted to ever part from him. At that time it seemed impossible that Nino and I would ever get back together….

But it was the faith of my daughter in our love story that changed everything for me.

During this time, my Lord Husband moved into one of his proprieties, and behold as our split went viral on Ghana and Zimbabwe social media, people had a lot to say about our split.

One Ghanaian woman called my Lord Husband and said, “We told you, do not marry this Zimbabwean girl, you were only supposed to use her and leave her. Please Kofi, leave her, never go back to her. If you want me to give you sex, for free I will, so you forget about Jean.”

Some Ghanaian women took this time to be close to my Lord Husband, some even visited him at his apartments.

But as my beautiful daughter Nakai had said in Faith, “I have Faith Mum, you and Nino are meant to be together.”

And the words of Nakai came to pass, and somehow Nino and I were literally in each other’s arms again. Within months we found each other again, and this time we became stronger than we had ever been.

Our love was revived. We held each other’s hands, and we became.

And my Lord Husband truly found himself. He truly became my soul mate. We discovered for the first time that our hearts literally beats together. We synchronized in spirit, soul and body. We vibrated to the highest frequency possible. For the first time Nino tapped into my feminine energy, and I fully went under his covering.

The world could feel our vibration and energy. Ghana could see that something had happened to their Kofi. He was no longer Kofi, but Atehene of the Northern Kingdom.

They could see that this is not the Nino born in Ghana, raised in the cult of Seventh Day Adventist Kumasi. He was himself at last, Free to be ATEHENE. A Free Worshipper indeed. Behold he wore sackcloth, and marked his face with the sign of life and spoke in a tongue Ghanaians had never heard.

As Zimbabweans resorted to their usual selves of claiming Nino bewitched me, it was Ghanaians who couldn’t hide their disdain at my reunion with Nino.

They started calling each other, speaking in their SDA gatherings, that I Mary-Tamar was Jean had used some Zimbabwean juju of mupfuhwira to bewitch my husband. Ghanaias started calling me a witch. Because of my power and anointing, Ghanaians now call me a witch.

My Lord Husband started receiving calls from Ghana, from elders of SDA cult to relatives saying they were so worried because he had married a Zimbabwean witch.

So recently I took my daughter on a coffee date at our local Costa to tell her that in Ghana rumour has it that I’m a witch, that I have bewitched Nino to become who he is today.

And Nakai looked at me and said, “I’m sorry Mum, I’m not being funny but anyone who thinks you are a witch is not right in the head.”

“For starters, you are way too upper-class and posh to be a witch…” My beautiful daughter said to me.

Apparently, in other words according to my first fruit I’m way too posh to be a witch…

I am way too posh to be a witch, your son was not bewitched, he just fell in love with his soulmate…it’s called DESTINY

The Genesis of the Revelation by

One thought on “Dear Ghana, I Am Way Too Posh To Be An African Witch”