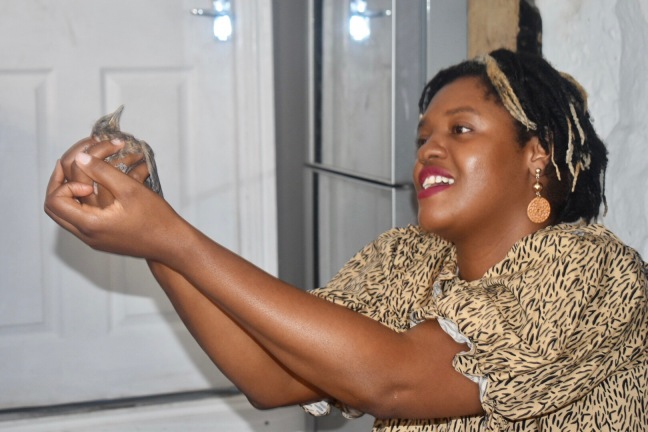 Two weeks ago I came to one of my husband’s cottages in Seaham, after I had reached a very dark place in the process of grieving my Father who passed away last month.

On the day my Papa died, not knowing that he was lying in bed dying of Covid, I went jogging and I had a beautiful encounter with a bird which pooped on my right eye. When a bird poops on you, it’s considered a blessing and a sign of good luck because birds are spiritual and are believed to be messengers from above and beyond. The chances of a bird pooing on you are slimmer than the chances of winning the lottery.

I came home from my jog and I danced and praised the Lord with my little girl Fadzi, telling her that amazing things were about to happen because I had received the greatest sign from above.

So the next day when I found out that my Daddy was gone, I couldn’t believe it. I was beyond devastated, so much if it wasn’t because I have children and husband, I had absolutely NOTHING to live for. I felt this void I couldn’t explain.

One day I broke down in front of my daughter and said to her, “I’m so lonely and broken, if it wasn’t for you guys I’d be better off dead to be honest. ”

I’ve never said something so drastic and desperate to my own child. But she surprised me and said to me, “No Mum, you are not lonely, look at how many people look up to you, you have so many fans and followers who think you are strong and amazing.”

At that point I felt so encouraged, because so many people I don’t even know sent me messages and heart felt prayers. The sincerity was so powerful I felt it. My very wise daughter reminded me that there will be an answer, somehow somewhere, as the Beatles sang. My followers online would say things which I found very comforting. Some had deep understanding of the afterlife and I found their insight into my father’s death really helpful.

My Father’s death truly humbled me, because I had never thought about dead people in that way before. For the first time I started to think about what happens to people’s spirits and souls after they die. Where do they go? I know about Heaven and Hell and all that’s written, but there is so much that’s not written, so much we don’t know about.

I started to think about my Father’s spirit, where he is right now. I would talk to him, and tell him that I couldn’t go on anymore. I would tell him how sorry I was, for all the things I never said, and some I said.

I remember one day, not long ago probably last year, I was mourning to him how dysfunctional his family was, how I was so much better without any of them, and how no one loved me from the family. Then he said to me, “But I love you Jean, you know I love you.” But I was so mean, and angry I didn’t even reply him. He wrote again, and said, “I love you mwanangu.” Meaning I love you my child. Again I didn’t reply.

When Daddy died I couldn’t forgive myself for that incident, I could give anything to have that moment back, and tell him how much I loved him too. I didn’t realise how much I loved Daddy until he was gone. But I was grateful I got to tell him that I was so grateful I was born his daughter just two weeks before he died and replied me and told me that I had made him cry.

When Daddy died, I would look out for this one star I’ve always seen, but never saw it again. One man randomly wrote on Twitter that my Father was out there navigating his way to his resting place, he said it takes a few earth weeks.

Well, about 3 days after Papa died, one evening I was dozing on the sofa because I was so tired. My children were around and my husband had gone out briefly to buy me some food.

Then I was suddenly woken up by a man standing in front me, I thought it was my husband. But I then saw it was actually a shadow, the same height as my Papa, the same body shape of my father, I thought I almost saw his face. Then the shadow disappeared.

When my husband came back I was so nervous about telling him what I had seen. But I had to.

“I know this will sound very strange but something weird has happened to me, I think I saw my father’s shadow. Like he appeared to me.”

“You have had a visitation. It happens quite often soon after a person dies. They will be trying to find their bearing, so their spirit will be hoovering on earth and they will appear to their loved ones.” My husband understood what had happened to me, he didn’t think I had gone crazy. He believed my Daddy’s spirit had actually visited me. I felt happy that wherever Daddy was🕊, I was in his spirit. I felt comforted that even in death I was still my Daddy’s girl. I felt forgiven about the times I was not so nice to him.

A few days after my Father’s death I also went out to sit on a bench by myself, and as I was overtaken with grief a blackbird came in front of me, and it caught my attention and I found myself asking the bird, “Daddy is that you?”

I have always loved birds, and I connect them to my gift of writing, but since my Father’s death I felt more connected to birds on a very different level. Each time I saw a bird, I thought it was Daddy.

So my husband then brought me to his cottage because there was a little black bird that had laid its eggs in the garden shed. Even though I had been staying at one of his flats, which my husband had gifted me to mourn my father, the moment I came to the cottage and saw the bird and the eggs, I didn’t want to leave. I called the mother bird Tilly.

I felt so comforted after my Father’s sudden death. And it was Tilly and her babies that comforted me. Two weeks ago I watched all the eggs hatch. It was truly a miraculous experience, I felt the birds and my father were connected.

A few days ago I watched the baby birds start to flee the nest. I couldn’t believe how fast they grow.

On Saturday morning I woke up to a baby bird on the door, as soon as I opened the door, the little baby flew into the house. It was in the house for a few hours then we had to put it back outside where Tilly was literally waiting for her baby.

I watched two of the babies jump off the nest just like that. I was able to hold one of the babies, as she was so calm. I took her into the house and sang for her until she fell asleep. I called her Robin.

If I had my way I would have kept Robin, oh how sweet she was. How she felt so at home in my hands. But it is actually against the law in Britain to keep a wild bird, they are protected by the law. To be fair Robin was never going to be happy being trapped in a house, she belongs outside.

I was so grateful I was able to have such a special moment with her, something really surreal even happened as I held her, the song Three Little Birds started playing on the radio. It was as though the birds were telling me that everything was going to be alright.

I let Robin back outside, and amazingly Tilly was there. I put a bird feeder up, and Tilly has been getting food from the feeder, then she feeds her babies directly from her mouth.

It’s been such an extraordinary experience to watch. So glorious to behold. If I was Sir David Attenborough I would have done a crazy bird documentary that happened in my own backyard.

One of the babies have left, but three are still here, learning to fly. One likes to hide under the rubbish. One likes to stay on the wooden fence. One stays by the back gate. Now I can’t tell which one is Robin, which is rather sad. But I’m just happy they are all healthy and doing well.

But because of this glorious healing experience, I’ve decided to summer here at the cottage. I’m like a traveler of houses, my ex-husband in a bid to have my children removed from my care said I live a nomadic lifestyle, he was prophesying I guess because today I’m a house traveler lol. Now that my husband owns a vast number of properties in the North East, I’m like a little black bird myself so I stay wherever the winds takes me. So this property is now officially off Air BnB, the Queen of the North needs it. I believe my Daddy’s spirit here.

I’ve made so much plans for my little back yard. I’m going to make the garden really pretty and Mary-Tamar, with rattan sofas, plants and everything. I’ve already been to the garden centre and I’m starting to bring a little colour to it.

Yeah I have managed to get two sweet little hens, so I don’t buy eggs anymore, which is nice. The children have named them Ruby and Dory. I will be getting bunny rabbits, a house bird, and a pet spider. Okay maybe I’m exaggerating a little, but this will be our little hidden farm this summer.

The King did say 2021 is the year of returning to innocence, and last weekend he cooked us a delicious okra and lamb rib stew on the fire, it was divine.

We also went on a hike and had a beautiful barbecue on Sabbath.

So I’m so gonna Summer here, I can’t be anywhere else. I’ve been comforted by the birds here and the whole lifestyle my father’s death has birthed. My Daddy loved everything about nature and returning to innocence. I would have sent him these pictures and he would have been so happy to see us cooking from the fire and enjoying the wholesome lifestyle.

I don’t really believe in reincarnation, but I believe without a shadow of doubt that the birds which made me stay at this cottage in such a dark hour of grief were sent here by my Papa to comfort me, and comforted I have been.

The Genesis of the Revelation by