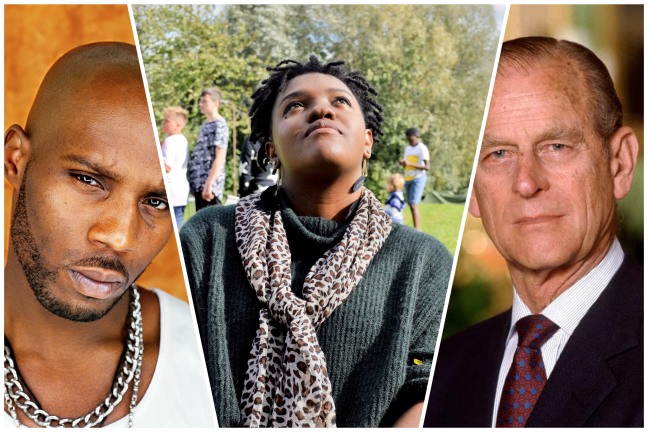 So this morning I received a very nasty message from a woman who has followed me for years, she was telling me that she was was no longer a follower of mine because I did not pay any tribute to American rapper DMX but instead I chose to honour Prince Philip whom she called a racist who never cared about black people. She said apparently I am licking the ‘as**s’ of white people for fame and money. I was actually hurt by this message because this woman was one of my followers I considered a true fan, she always wrote to me, she said I inspired and encouraged her, and she called me her Queen. Today I woke up to a very disrespectful message from her because I didn’t write a Tribute in honour of DMX. But my husband told me not to not fight with her but shake the dust off and journey on. My husband said instead of replying her, if I was that upset, I was better off writing it off in a blog.

The thing is, I have had to delete comments from black people, Zimbabweans especially on my Facebook page who have a serious problem with a black woman like me passing their condolences regarding the passing of the Duke. Because of the colour of my skin, somehow to many black people believe its morally wrong for me to mourn Prince Philip. It’s in times like these I believe men like Dr Martin Luther King and William Wilberforce risked their lives for black people to be free in vain, they must be turning in their graves, because right now it seems like all their hard work was all for nothing. I feel like in 400 years since the slave trade, this is a kind of a new wave of racial war history has not seen, especially during this generation, there is just way too much racial anger out there.

I blame one woman who is carrying a spirit of perdition for all this racial anger and division, yes Meghan Markle is very much at the centre of all that is happening today when it coms it race and division.

Black people who were posting condolence messages of Prince Philip to black facebook groups were met with angry messages like below, where they were told the black groups had nothing to do with the Duke as he is apparently burning in hell, and they were told to focus on DMX who apparently was the true ROYAL who is in heaven right now.

Now as Ghanaian President is being attacked in Ghana for saying something humane in the wake of death of a British Prince, back here on British soil, British people are upset with British sports champion Lewis Hamilton because he chose to mourn the American rapper whilst saying absolutely NOTHING about the passing of the Duke of Edinburgh.

I am not a fan of Lewis Hamilton, and I truly believe that he shouldn’t have accepted the Knighthood if he feels so much disdain towards the British Royal Family, that’s hypocrisy. It sounds like he hates the monarchy so much, so why on earth did he accept the Knighthood? He is a double minded man, and ironically lacks the honour and integrity the man he is shunning, Prince Philip had. Maybe he was afraid that if he sent condolences to the Queen, black people would turn on him, since he has been quite vocal about Black Lives Matter. Oh well, at least Prince Philip was always true to himself, a better man he was than Hamilton. With Hamilton, one minute he is proudly British when it suits him, and the next minute he hates the monarchy when it suits him, or when he’s being a coward. So I can understand the anger of the British people.

Yes as a Knighted British citizen he should have sent condolences to the Queen, that’s the moral obligation he has and least he could have done, but then again it is within his “rights” to grieve whomever he wants, even when he is wrong. The British people who love the monarchy should also allow people to express their “wrongs” like Lewis is without being attacked, sadly, or rather beautifully, that’s democracy.

Now this brings me to the black people who are angry with me for not mourning American rapper DMX. It’s sad that I have to say this since the poor man is departed, but since black people want to know why I never acknowledged or paid any respects to DMX but chose to honour the life of the Duke instead, here it is. I can not pay any respect or tribute to a serial criminal, a drug dealer and addict, a deadbeat father to some of his seed, a man who tortured animals. The man fathered 15 children with 9 different women for goodness sake, and he chose not to be responsible for most of those scattered seeds he planted in multiple women. Black people may say DMX turned into the criminal he was, and became a dead beat father to some of his children because he had a troubled childhood as an underprivileged black statistic child, and never had a father figure in his life. Well Prince Philip actually had a more troubled childhood than that of DMX and he didn’t have any “white privilege” during his childhood, but he grew up to be the very opposite of what life should have turned him into. Both DMX and Prince Philip had the same troubled start, both were without a doubt GREAT MINDS, yet one became a criminal and a deadbeat father and the other became a loving husband and father and dedicated his life to service. So who then deserves the honour of my pen? Should I honour people based on colour of their skin or on their character?

As for DMX’s music, great it may have been to many black folk but it never inspired me, I don’t even know a single song of his. So I have nothing to pay tribute to. As a mother of 3 black boys, my prayer is that I will never raise any of my boys for them to turn out to be a man like DMX. He is no role model to my sons.

As a mother of black of 3 black British boys, I would rather my boys learn life lessons through the life of the Duke. My oldest son already understands the art of serving his country. By the age of 9, he was featured in the local paper in Milton Keynes, and made history by designing a flag for his then borough, Eaglestone. Today my son has a landmark of the work of his hands and the dedication to his country on British soil. Last Sabbath as I taught my children about the life of Prince Philip, my oldest son told me that what he learnt from the life of the Duke was that he has to work hard in school, like how Prince Philip worked hard and became a head-boy, and he said if he works hard, God will do the rest. How can my oldest son then learn anything from the life of DMX? Should I teach my boys to be like DMX, that it’s okay to do drugs, go around the country fathering children you don’t look after, and spend your life in and out of jail then became a great artist and somehow that makes you a HERO? No, rather, it’s their life privately, how they treat their wives and children, how they serve their communities, which will make them true heroes.

I have always served my country, even when no one was looking, even through my children, through the lessons I teach them. As black people accuse me of honouring the Duke so that I will get fame and money, I am not seeking validation from the monarchy. I just wrote the tribute, with tears in my ears, knowing that even the Queen may never see it or read it, but because I believe that in life we should never do anything seeking something in return, for only God rewards even the secrets sacrifices we make that no one notices. As King Solomon said, even the birds of the air honour our words, so when I write, the birds take my words to whoever needs to hear them. They may be 5, 10, or a 100 people, but if a little bird carries the words I write to them, and they are inspired by me, then I am achieving my purpose on earth.

It is to them who honour me for what I do, White they may be, Mixed race they may be, Asian they may be, a few Black they may be, whence my reward comes from. I may lose the few black followers I had as I journey on with my pen, but one thing I know is the story of the Iron Duke has birthed a faith in me so strong, like his story was also meant for me, because a little bird also carried his story to me. That is why as a black woman, my loyalty is with the IRON Duke of Edinburgh, not the troubled RAPPER DMX.

The Genesis of The Revelation By