As Africans celebrate Africa Day taking to social media, posting pictures in their African print clothing, I find it sad that the African print material is the pride and symbol of African clothing. I personally find the “African print material” tacky. I just find nothing attractive about the “African wax print” and I don’t like it. Sorry. I’ve only ever worn it a couple of times. My 16-year-old daughter feels exactly the same,  she doesn’t like African print materials as she finds it a bit trashy and over the top. My daughter always finds it funny when she goes to Tesco or Asda and she sees black women in their full African print attires, head scarfs and all, she will be like, “The way the Africans aunties like that African attire though, they actually dress up in that attire to go to Asda and the way they stand out though…” I always roll with laughter when she starts going on about African print attires, she has such a crazy sense of humour about them.

Her favourite You Tuber is this very talented Nigerian guy, I have forgotten his name and can’t be bothered to dig it up, but he plays a Nigerian mother in full African print attire and we always have a good laugh about it.

I always used to feel so bad about my “dislike” for the African print, so I tried my best to embrace it. I felt like some traitor until a few years ago I found out about the history of the African wax print. Let’s just say, I was so embarrassed for my people as I always am most of the time. But let me say, I’m not against anyone wearing African wax prints, it’s not demonic, lol, some African designers do amazing things with it, but for me I now understand why I’ve never liked it and find it rather garish and rowdy.

Well, before the African wax print polluted Africa, the people of the continent wore their own unique clothing in accordance with their country, identity and heritage.

The African wax prints have nothing to do with Africa or the history and heritage of the continent. The fabrics are neither made in Africa nor are they designed in Africa. They were not even originally designed for Africans. They are actually European made textiles which Africans have adopted as their own. The whole waxing of fabrics started in Indonesia, and the Dutch started manufacturing the wax fabrics for the Indonesians, then, unfortunately, some of the dyes created cracks, or rather mistakes on the fabrics which the Indonesians did not like, it wasn’t to their taste as it was not “nice”. But a strange thing happened, African tourists loved the messed up wax prints and found them to be prestigious and a status symbol because it was different and coming from white people. That is the rather “pathetic” history of the iconic African Print.

A huge market was suddenly created and there was a high demand for the messed up Dutch wax textiles, and Africans claimed this fabric as their symbol of status and high fashion.  Rich Africans, especially in West Africa, saw this messed up Dutch fabric as the ultimate fashion statement. And this happened in the 19th Century.

I find this whole history of the African print rather embarrassing to be honest, it just puts Africans in such an inferior position, always looking up to the Europeans even for clothing status. In 1956 the Nigerians designed a wax print in honour for Queen Elizabeth’s first visit to the country, they gave the crowds the print to make sure the Queen felt welcome.

Honestly, has any African King, even King Mswati the last absolute reigning monarchy of Africa, ever been honoured to have his face plastered all over dresses in England? It just goes to show how little Africans value themselves, no sense of pride at all, hence they saw the Dutch Wax,  the one which had mistakes and cracks meant to be thrown in the bin as the ultimate pride of their appearance, so the Dutch called it the African Print.

Anyway, talking of the Europeans, before the colonialists also introduced their way of dressing to Africans, the people of Africa had their own way of dressing, and it certainly wasn’t the “African cloth”. They wore mostly animal skin and bark they manufactured from trees. Some Africans just wrapped plain cloth around them, like in Sudan the men wore a white tunic wrapped around their chest and white baggy pants. I would choose this any day over any so-called African attire.

The San people in Southern Africa, Botswana, Zambia, Zimbabwe, Angola and South Africa wore plain earthy coloured clothes made from either bark fibres or animal skin, wrapped around their shoulders or waists, again I would wear this any day over the so-called African print.

Then you have a lot of tribal groups like the Mbororo people who are spread out from the West of Africa to Central Africa, they are a part of a large nomadic group known as the Fulani and they are well-known cattle herders, they wear dyed cloth and have tattoed faces and bodies. This type of clothing is very unattractive to me, would never wear it. But needless to say, this is African dressing in its fullest.

There are various other traditional dressing in Africa, but the African wax print has never been part of it.

There are some real African traditional clothes which I like, and some which I would never embrace or associate with because of the meanings behind them.

But on this Africa Day, I want to celebrate a certain African textile which I love and find very sacred and special. The Kente fabric from Ghana.  This fabric dates back to the 17th/18th century and what I love about Ghana Kente is that it has no outside influence in its origins. Kente has its origins from the Akan-Ashanti Kingdoms of Ghana. The Kente cloth was originally only worn by Ghana royalty. The cloth was handwoven with silk and reserved for Royal Families, including chiefs and Queen mothers. 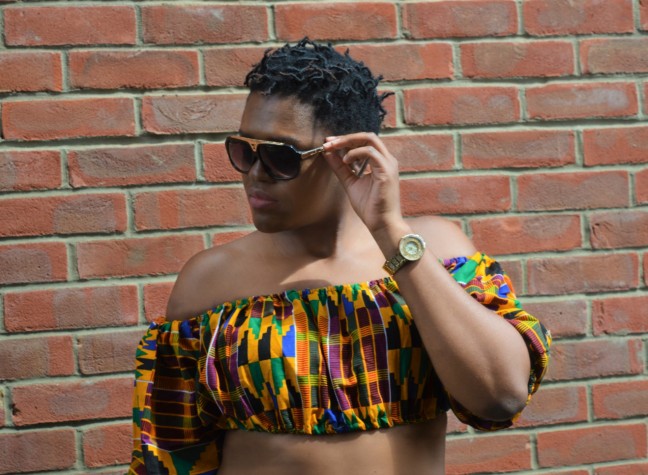 “Now Israel loved Joseph more than all his children, because he was the son of his old age: and he made him a coat of many colours.” Genesis 37:3.

Joseph’s coat of many colours was handwoven fabric, it was not a modern Jewish machine designed fabric as we see depicted in pictures today. It was intricately woven with different brightly coloured threads. More like the Kente cloth.

So for me, if there is any African cloth or fabric to be celebrated on Africa Day, it’s the Kente cloth from Ghana, it has an amazing sacred black history. This brightly coloured intricately woven textile has become a symbol of West Africa’s pride and identity,  particularly Ghana, where my King is from.

Kente is sacred and special, it’s the pride and identity of Africa meant for Ashanti Royalty.

With that, I say Happy Africa Day