This is exactly what I mean when I say that Africans are the descendants of Ham, their behaviour pattern alone is enough proof that there is a serious curse on that continent, Zimbabwe being the leading cursed African nation. I find myself literally opening my mouth wide each time I read news from Zimbabwe, some of the things which happen there are beyond my comprehension, especially the leading news dominating Zimbabwe today.

I can only link what has happened in Zimbabwe today to the curse of Ham, sorry but there is no other logical explanation in my head. Africans love bible prophecy and all, they are generally obsessed with “prophets” and the “Bible” even to them this COVID 19 is a bible prophecy coming to pass, but strangely they are always silent on the biggest prophecy of all, the curse of Ham. Who is Ham, and how do we recognise him today? How is that curse prophecy being fulfilled? For me, I say just look at Zimbabwe today. Talk about the servants of servants. Today I say the servants of the Chinese, who today, by the same bible the Africans are obsessed with, the Chinese are actually SERVANTS.

Now, of course, not all Africans are descendants of Ham, there is a tiny population in South Africa and even in Zimbabwe, called the Lembas, whose DNA was proven to be direct descendants of the biblical Jews. There are also Jews in Ethiopia. However, in Ghana the Ashantis and in Nigeria the Igbos are probably the highest populated descendants of the Hebrews in Africa who fled to the continent when the Temple was destroyed.

Apart from these lost tribes scattered in Africa,  I strongly believe that the rest of the continent is populated with Hamites, hence the abnormal behaviour patterns which dominate these countries which indicates that the people are under a huge spell.

Now Zimbabwe, proving how cursed the country is, has today announced that, “A plane carrying a consignment of medical supplies together with a team of experts in fighting Covid 19 has arrived in the country. The team is expected to visit various health institutions and share its expertise with local medical practitioners.” It is shocking and embarrassing, isn’t it?

As if the Chinese coming into the country is not bad enough, these Chinese “experts” will not be quarantined at all, instead, a red carpet has been rolled out for them and I am sure they will stay in 5-star hotels whilst in Zimbabwe. They have also apparently donated medical supplies to help the country fight Coronavirus.

You would think this is some kind of sick joke, but it’s not. 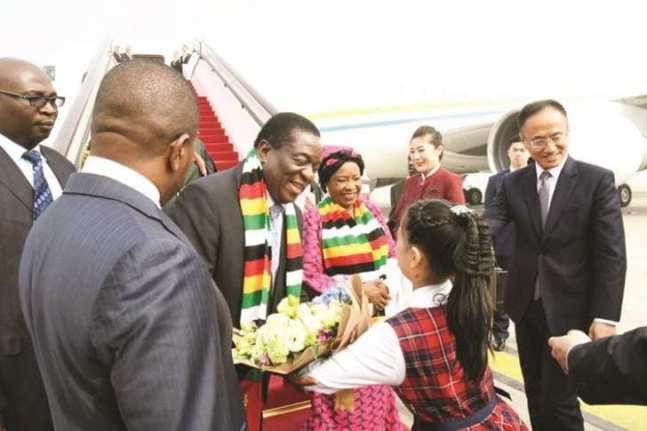 The biggest fool in Africa at the moment is Emmerson Mnangagwa, the fool who removed the anointed Robert Mugabe from power. He undid everything Mugabe did and compensated the white farmers, you couldn’t make it up, could you? The compensation of white farmers shocked black people all over the world, it cannot get any more jaw-dropping than that. I always say that the worship of white-supremacy by Zimbabweans always makes me cringe. Now the country is 100 times worse off than it was when Mugabe was in power.

So today Mnangagwa brings in a team of “Coronavirus Experts”  whatever that means, from China, where the virus supposedly originated and rolls out the red carpet for them, to an African country which has one of the lowest cases of Covid 19 in the world. Zimbabwe has had 4 deaths from Covid, that’s if , a very big if, the deaths were even truly from the plague. Yet this damned country sees it fit to bring in people from a country where thousands have died, to help “treat” a virus which is not even in the country.

Not to mention that just last month, China hit the headlines for treating black people like dogs in their country, kicking them from their homes and accusing them of spreading Coronavirus.

Yet Mnangagwa’s responds to how evil the Chinese have treated black people during this plague by rolling out the red carpet for them and calling them “experts” to a plague that currently has no cure.

If these Chinese where really experts in treating this plague, why have they not come to the UK, USA or Itay where thousands have died. Why on earth are they going to an African country with one of the lowest cases in the world?

I believe the so-called Chinese “Experts” are not coming to treat a non-resistant plague in the country, they are coming to take over the land, and rule, and have access to the silver and gold of Zimbabwe. Just like Noah said, “Cursed be Canaan, a servant of servants He shall be to his brethren.”

Just last month, returning Zimbabwean residents from the UK were subjected to 21 days of mandatory Quarantine in a filthy hostel with no running water, because they were coming from a Covid hotspot. Yet for the Chinese, where the pandemic originated, a red carpet is rolled out for them and they will not be quarantined.

For Mnangagwa, the Chinese do not need mandatory quarantine, certainly not in those filthy hostels. I am sure if he was to quarantine them, it would be a 5-star luxury hotel.

Mnangagwa cannot help but bow to the Chinese, even when they cruelly ill-treat his own people in China, he bows and gives them whatsoever they wish at their command. A servant of servants Zimbabwe truly is.