“Jean allow me to criticize you if u always read my comments am sure you’ll see kuti I always praise you. On this one, am sorry I think you helped Kofi to “play” that woman..first, she was told she would get a house,after Kofi slept with her,u then decided she won’t get a house..now u have decided she should be dumped, why? That’s cruel!! As a woman, you know how it feels like,to be given empty promises then get dumped. Hagar wanted to be married officially and in a right way, how does that make her a bad person? And why does her skin color bothers you now, didn’t you know she was white when your hubby brought her home?”

I received this critique from one of my followers which I thought was worthy of my response. I have realized that there are quite a lot of my readers who are sympathizing with Hagar being put away and see her as some sort of victim who lost her womanhood for a house that she never got. I will answer the above criticism point by point.

“On this one, am sorry I think you helped Kofi to “play” that woman..first, she was told she would get a house after Kofi slept with her,u then decided she won’t get a house..now u have decided she should be dumped, why? That’s cruel!!”

I am sorry to break this to you but Hagar actually gave her virginity away. I think its always sad when women use their virginity to manipulate men. The plan my Boaz had was to finish doing up the property, probably spring next year as it has a lot of work to be done, and then hand over the keys to Hagar. His plan, as clearly stated to Hagar was for them to consummate their marriage in that house. Hagar chose not to wait for the appointed time to consummate her marriage, and she freely gave her womanhood away,  behind my back too, hoping it would speed things up. She was the one who could not wait and broke the terms of the agreement, and she knows that.

Allow me to quote the words of Grace Mugabe, my Boaz is actually not a Babazonke, even though he is a polygamist, he doesn’t sleep around. He is not a whoremonger like the majority of black men. He understands that a lot of women carry all sorts of energies and how intimacy is spiritual, so he will never go around just sleeping around, he would rather be a polygamist and do things the right way. When it comes to intimacy, he can actually wait. The fact that he wanted to take things slow with Hagar and wanted it to be special actually proves he loved her, but she is the one who failed to honor that love and played herself. So Hagar made her own bed. She broke the terms of the house, that’s why God did not allow her to have it, besides it was never bought for her. My husband came to me and told me he wanted to marry Hagar and give her a house, and I initially agreed, but obviously, I thought this through, and it was not the right thing to do. And my God has prevailed for me.

If you say I am cruel to my own Hagar,  then my own mother Sarah, the wife of Abraham was cruel too. That is the thing with Christians, deep down they actually hate the God of Israel and hate his patriarchs too. Sarah actually gave the original Hagar to Abraham, then when Hagar bore Ishmael, she told Abraham to send Hagar and her son away. And it was so sad, that Ishmael almost died of hunger and thirst in the desert and God had mercy. Yet God himself implies that what Sarah did by sending Hagar away was actually good and righteous. I believe everything I have done is holy and acceptable to the God of Israel.

Hagar wanted to be married officially and in the right way, how does that make her a bad person?

I am sorry, but I the first wife of the King am not even married officially. How does Hagar think she can just come and have an official engagement and wedding when I haven’t even had that? Is that not the definition of a homewrecker?

I met my Boaz when he had absolutely nothing. We had our wedding in the park, and my daughter officiated the wedding. We had our secret garden wedding before we had even consummated our marriage. It was one of the most beautiful days of my life. My Boaz looked me in the eye, and he said if I am patient enough to stand by him, he would give me that royal wedding that the world would be in awe of at the appointed time. 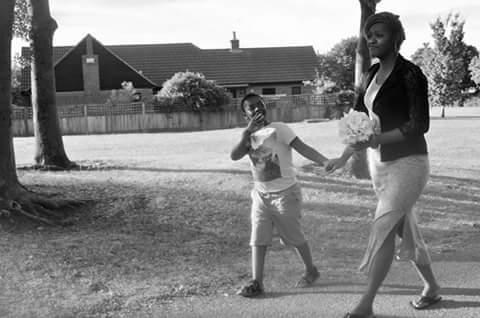 Hagar could not even wait for the house keys…

Yet five years later, I am still standing next to my King, waiting as his Queen.

She came and thought she could actually buy herself a ring and tell the world that my Boaz has betrothed her. Honestly. Ummm it does not actually work like that, that is why my King was so put off by the ring, and that was the end of her journey with him.

Even the God of Isreal has laws and regulations about polygamy and how first wives are meant to be treated.

This is the problem of most black men today who have side chicks, they give so much power to side chicks/concubines at the expense of their first wives. Yet it is the job of the side chicks/ concubines to honour the first wife. My Boaz understands this very well, and any woman who fails to honour me will lose favour with him. I am his Queen.

Kate Middleton waited 10 years for Prince William to propose, and the world laughed at her and called her waity Katy, but who is laughing now. Is she not the future Queen. A King is worth waiting for, and you serve him faithfully whilst you wait for him to put a crown on your head.

Mary Chiwenga failed to do this, that is why she will be rotting in a dungeon when she is supposed to be in a palace with her King and her children.

A lot of women do not know how to love Kings or wait patiently for the appointed time for their reign. They were not stupid when they said, “Good things come to those who wait…”

And why does her skin color bother you now, didn’t you know she was white when your hubby brought her home?”

She is not white, she is Asian.

I think if you read my posts from the introduction of Hagar into our family, I did point out over and over to my Boaz that I wasn’t so sure about her being an Asian. I am extremely pro-black, a melanin advocate to be precise. I do not want any seed of my King to be “whitewashed” or rather “Asianwashed”. He is building an empire, and a whole new generation here, and it’s key that his generation is BLACK…especially if it is the rebuilding of the Davidic Dynasty.

Talking about a new era and a new generation, oh I so want to give my King another son, just one more. And I feel so tired, my face is swelling, and my taste buds are funny, Boaz took me to the local pub last night…and I hardly ate, which is odd because I love my good old pub meal. I ordered fish and chips as well, and that was even worse…

I won’t be going to the pub for a good while, I told Boaz I am craving Jamaican food so for now, he has to replace the pub with a good Jamaican restaurant. I am not saying anything has happened to me, I think it’s all in my mind but still…

Anyway, I always say this to Shulamite, who is so humble and simple-minded, that Boaz loves a simple woman, don’t rush him, don’t be money orientated. I always tell her to learn from me if she wants to stay in his favour. I am the simplest woman to please to my Boaz, I have never demanded a diamond ring, I do not need shopping sprees to be happy. All I ever want from my King is a beautiful home for my children, and a walk down the local pub does me okay.

But I guess some women want diamond rings and men to give them the world, but I just want him…

And as for Hagar, she wanted more than just the King and she ended up walking away with nothing…I never played her, she played herself.

One thought on “Jean, You Have Been Cruel To Hagar, You Helped Your Husband To ‘Play’ Her”