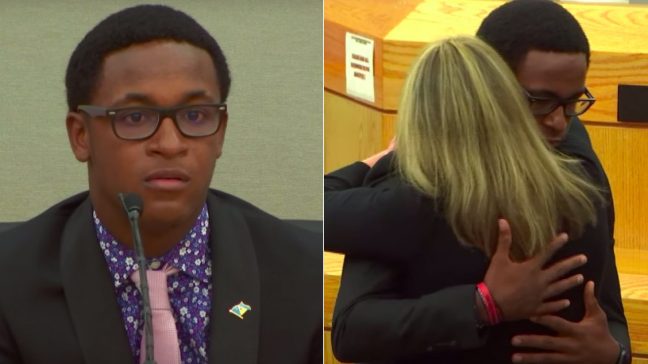 This week I have been disturbed and disgusted by the events surrounding the sentencing of Amber Guyger, a white woman who has been on trial for breaking into her black neighbor’s apartment and killing him.

But what has disturbed me more in this case was not the crime, for this is the norm in America, but what troubled me was the behavior of the victim’s family, especially the young brother of Bothan Jean, Brandt Jean, who took stand in court and said he wanted whats best for his brother’s cold blooded killer and he didn’t want her to go to jail. He said he had forgiven Amber Guyger, and he LOVED her and he wanted her to give her life to Christ bla bla bla. Then he literally begged the Judge to hug her. It was a pathetic sight to behold, I almost vomited as I cringed watching him hug the cold blooded murderer.

The way he was hugging her, one would think he was about to take her to a private chamber and make love to her.

I went from being angry, then all I could do was shake my head and say “God, these black people actually deserve this evil done to them. They are such traitors, they do deserve to be treated like fools.” This was my prayer to God.

And if this traitor thinks that his Christian Jesus is going to save him, he has a long way to go when it comes to salvation. His religion is a curse to him, and the reason why Black people continue to suffer till today. His nutcase religion is the very reason why Amber Guyger shot his brother in the first place, she knew she would get away with it and be forgiven.

If I was the judge, I would have immediately freed the white witch Amber, and would have sent this fool and traitor Brandt Jean straight to jail. Since he doesn’t want Amber to go to jail, why can’t he take her place instead, and play the role of “Jesus” and be the atonement sacrifice for the killer. There is no forgiveness without sacrifice, especially where blood has been split.

However in shocking scenes, the black female judge Tammy Kemp began to weep when the traitor was hugging the killer.

It baffles me that the only thing black people are obsessed with in the bible is FORGIVENESS. The level of delusion in these black Christians is truly disturbing. Like they are beyond redemption really.

Black people are the only race who do not know how to read the bible. The moment they hold the bible, they become idiots. They stop using their brains. They don’t understand that the bible is a historical book with EVERYTHING in it. The white man knew how to use the book, and enslaved black people with it.

The same book that black people use to quote forgiveness, is the same book that has rules and regulations on slavery, and how servants aught to behave towards their masters. The bible has never condemned slavery, rather it regulates it, and those were the verses used to enslave the black race.

Then the white man showed black people verses about forgiveness, and 400 years later we have lunatics like Brandt Jean standing in a court of law, saying he doesn’t want justice for his brother’s blood, but he wants to hug and LOVE his killer.

To make it worse, the parents of the victim, the bigger traitors, goes to church and preaches that they have forgiven their son’s killer. The father Bertram even wants to be friends with Amber Guyger. How mad can black people be?

Is Bertram Jean not a traitor to his own dead son? What a religious lunatic.

If we can’t even value our own lives, why should white people care? If our lives are so meaningless that killers are just loved and forgiven, then I am sorry, but according to black people, BLACK LIVES DON’T MATTER.

As if the family of Botham Jean were not bad enough fools and traitors, the black woman judge who oversaw the case only sentenced Amber to 10 years in prison. Well, for a white woman to get 10 years for killing a black man, it is better than nothing I suppose. She could have walked free like most of them do.

But what disturbed me about the black Judge was not the sentencing, but the fact that she comforted the white killer soon after she sentenced her, and gave Amber her own copy of the bible.

Then when we thought we had seen it all, the black cop started stroking Amber’s straight hair and comforting her. You really couldn’t make it up folks.

Ninety percent of black people are damned, in a very sunken place, with the bible as their curse. They can’t understand the book because of the strong delusion and the spells cast on them. The products of those delusions were seen during the trial of Amber Guyger in the form of  Botham Jean’s family and the black people who oversaw this case who were all bowing down to white supremacy.

I will leave you with these scriptures…and yes this too is in the bible. The same Edomites that you black people are obsessed with forgiving and loving, this is what an Israelite Psalmist says about them in Psalm 137.

“Remember, O Lord, against the sons of Edom
The day of Jerusalem,
Who said, “Raze it, raze it,
To its very foundation!”

O daughter of Babylon, who are to be destroyed,
Happy is the one who repays you as you have served us!
Happy the one who takes and dashes
Your little ones against the rock!”

Isn’t it funny, that black people dont normally forgive each other. They be so quick to pardon and love white people, but they can’t even forgive their own brethren.

May the God of Israel judge these evil traitors, these spiritual whore-mongers like Brandt Jean who use the bible and forgiveness for their treachery and blasphemy, and come in the form of Christianity, the religion of their masters.

May God keep traitors like Bradnt Jean in bondage, keep them in prisons of their own minds, for they have defiled themselves with the gods of Babylon. And please O Lord, do not count the evil of these traitors on us,  the rest of the remnant who are meant to be saved.

My prayer is that all black traitors should pay the price and be the sacrifices for the black lives which matters.

By Mary-Tamar was Jean