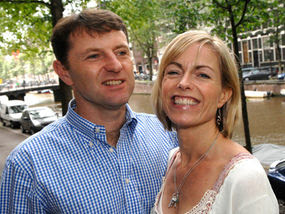 This is without a doubt one of the greatest mysterious high profile unsolved crime cases of our time. First of all,  I do not understand why Gerry and Kate McCann were given funding by the Government when there are thousands of genuinely missing children who never get any attention.

In history, no parent of missing child have ever had the global media support like Gerry and Kate McCann have.

They left their little toddler alone at night….hello.

I remember the story of a single mother in the UK who used to leave her new born baby asleep alone in the house whilst she did the school run of her older child. Neighbors noticed something was wrong when they continually saw her always doing school runs without her baby, and reported her to social services. This poor woman ended up in court for child neglect, with the risk of having her baby taken from her. She was let off with a caution and warned never to leave her children in the house alone. She was obviously a black woman.

Then you have two doctors who goes abroad, leave their 3 children who are all under 3 years alone whilst they went out to eat dinner and no authority in the UK bets an eyelid. In fact they are rewarded with publicity and funding from the Government! I can never get my head around that. Gerry and Kate McCann must be very connected to some people in power because the whole thing makes no sense at all.

Whats more shocking is they both show no remorse at all for leaving their children unattended in a foreign country. They show no guilt or regret that they left their babies  and toddler alone causing their daughter to be “abducted”! Surely any normal parent will actually blame themselves and take full responsibly under such awful circumstances.

Whatever happened to that child, stolen or dead, they have full responsibility for their daughters fate. It is their fault.

What has shocked me the most is how Kate McCann would look people in the eye during her many interviews and say, “We were checking them every half an hour!” How can a mother of a missing child have the energy to defend herself and show no remorse and refuse to take any ounce of responsibility that her actions led to her daughter’s disappearance.

That woman is anything but a mother. She failed Madeleine and she has shown no emotion or any concern at all for her own daughter.

If anything happens to my children, be it a fall or a cut, I always feel guilty thinking, what could I have done to stop my baby being hurt. What should I do next time to make sure my baby doesn’t get hurt again. I am not claiming to be the perfect mother but having emotion and concern for your children is something found in any woman who is actually a mother.

When something bad happens to your child, the most natural instinct is to feel guilty because as a mother you are the first protector of your child. So feeling guilty is part of the emotions that a mothers love evoke. However Kate McCann is a very strange woman who seems to lack that mother instinct. Her behavior and emotions, or lack of, is the biggest clue to this mystery.

I also believe that the reason she lacks emotion or concern over her “missing” daughter is because Madeleine have never been missing in the first place.

I am going to say what I just think. She killed that girl probably by accident, after drugging her so she could go out and enjoy herself. And her husband had to protect his wife because it would have meant jail for her and their two remaining children taken from them.

The things they did after Madeleine went missing baffles the mind.

Why would she wash her daughters favorite teddy which she went to bed with every night? Your daughter has just gone missing, where would you get the drive and energy to start washing a cuddly toy? Do cuddly toys even get that dirty that they need an emergency wash? My children have had their cuddly toys for years and I have never washed a cuddly toy, especially one that would be favorite to a child. But strangely Kate had to wash her daughters’, not even on a normal day, but the day her child was “abducted”.

Why was no DNA of Madeleine found in the apartment? Why did Kate sterilize the apartment after Madeline’s supposed disappearance? Gerry had to fly back to the UK to get Madeleine’s pillow for her DNA. How odd is that.  Then there is the sniffer dogs which picked up the corpse’s scent and blood. Then the Investigation Officer who was fired for actually saying and suspecting what everybody else thought. He even had more evidence to believe Kate and Gerry killed their daughter and hid her body.

What I have learnt in life is that if something doesn’t add up, its exactly what it is. There is something seriously wrong with the Madeleine McCann case, and only the parents and their close Tapas friends know.

Kate has even wrote a book called Madeleine, talk about milking the situation.

Whatever the case, Kate and Gerry McCann are a very intelligent couple, and privileged too, not only because they are doctors but because they are white. They have used their privileges to their advantage, and today they are secretly laughing all the way to the bank whilst they continue the circus of pretending that their daughter is missing.

Well I am glad that at least they are not the only ones who have profited financially from their lies, the detective who lost his job because of Kate and Gerry had to also gain something from the lies, at least he was telling the truth of the lies.

Former police detective Gonçalo Amaral was brave enough to write a book exposing the McCanns for killing their daughter and hiding her body. Kate and Gerry fought tooth and nail to get the book The Truth Of The Lie banned from stores, and initially won. But the former detective fought them back and the ban was overturned by High Court judge on appeal. Isn’t it amazing how Kate and Gerry always have the drive and energy to fight people when their child is missing.

Well, I am glad that Gonçalo Amaral won the case in the end. That book is the only ounce of justice to have happened since Madeleine “disappeared”.

I am a believer of time being the greatest revealer of the Truth. It seems impossible now to ever know what happened to Madeleine, but time will do the justice eventually. And God is also a God of justice, Kate and Gerry will have to answer to Him one day, whatever they did to that little toddler, only God knows.

All I know for certain is if Gerry and Kate McCann were black, they will be both rotting in jail as we speak. Well, for now, white privilege and social power has kept them out of jail.