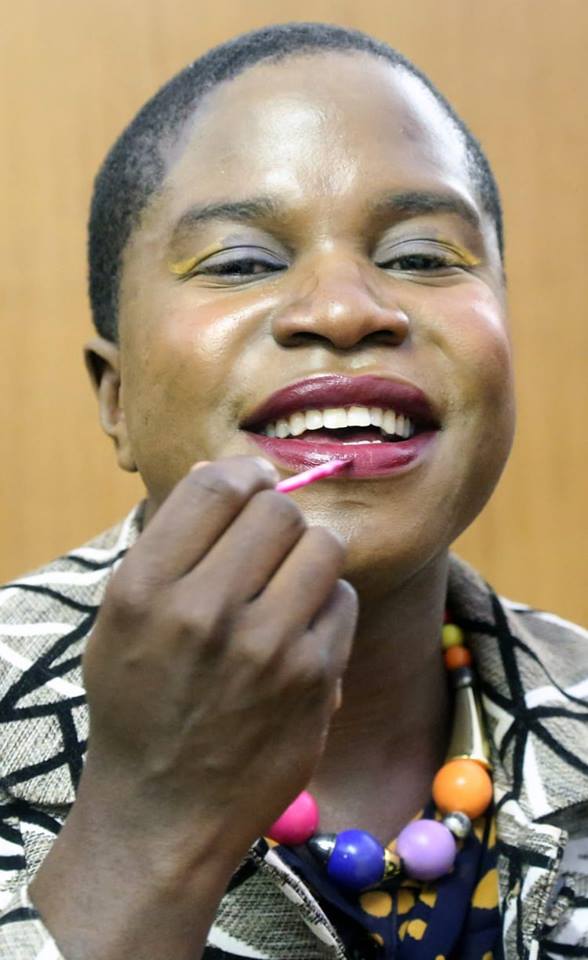 Even though I was born in Zimbabwe, my spirit refuses to resonate with this country. But because I was born there, and because on my Facebook, I have a lot of Zimbabweans who are my friends or followers, at times I have no choice but to address some Zimbabwean issues as a writer. Some of the crazy batshit things which happen on Zimbabwean social media end up on my timeline, and some of it is too shocking to ignore.

There is a Zimbabwean born man who goes by the name Tatenda ‘Tatelicious’ Karigambe. He now lives as a woman in Sweden. He attracts a large Facebook audience of over 35 thousand followers. As you notice, I am addressing him as a man, because even though he is a transexual, addressing this man as a woman is like disowning my birthright and privilege of womanhood. The marks on a leopard skin cannot be washed off no matter how long it stands in the rain.

There is such a thing called morality and ethics whether we like it or not. That is why we are human beings and not dogs. Though we are free,  we are not free to do whatever we wish to do. Freedom of expression is overrated. You can not strip naked in public and decide to walk around in a society which doesn’t allow that. You will be arrested for indecent exposure. We are all bound by some moral principles wherever we are. In 2012, Britney Spears was sued for sexual harassment by her former bodyguard after she used to walk around naked in front of him, in her own house. The bodyguard felt uncomfortable and violated by her nakedness. There is that fine line when you remove your clothes in front of people. Nakedness can be disturbing, sometimes you have to just put it away. Not everyone wants to see it.

Tatelicious comes on Facebook live and has full sexual intercourse and calls it being a ‘free spirit’. He comes on Facebook live to give blow jobs to his fellow men and justifies it by saying he’s a ‘sex worker’ and also calls it ‘teaching women how to do it’. He strips naked on Facebook and starts dancing and says he does this because he once nearly died of Aids but survived so he celebrates life by dancing naked on Facebook. When some few reasonable people question his sanity, he says it’s his body and apparently, his rules.

He is hailed as a ‘Queen’ by his large Zimbabwean followers who are mostly women. When a man becomes a Queen who is adored by a large number of women from one nation and becomes a symbol of identity and inspiration for women, it clearly defines the state of womanhood of that nation. Zimbabwean Heroine Mbuya Nehanda is hailed for her legacy for the revolt against British colonisation. One would think these are the type of  Zimbabwean women who deserve to be given the title of Queen, but behold now their Queen is Tatelicious, a man who earned the title by performing oral sex and full sexual intercourse with other men live on Facebook. That is Zimbabwe today!

After his oral sex videos, Facebook did ban him, but I can’t wait for Mark Zuckerberg and his stakeholders to not only ban people like him from doing live videos but for them to face prosecution. Children on Facebook also need to be protected from such acts.

I won’t even bring the Bible into this. Let me keep it worldly. Like I said by Mark Zukerberg’s standards of morality, this man is dangerous and for that Facebook had to shut him down.

But somehow he gets away with everything he does because any criticism of his disturbing behaviour is labelled ‘homophobic’. And his followers will aggressively attack, telling critics to stop judging him, let him be, yet they are the most judgemental followers themselves who result to vulgar name calling if their Queen is questioned.

His ‘anyone who criticizes me is homophobic’ defence mechanism is getting rather stale especially by Swedish standards where he was granted asylum because of his sexuality and skin colour. A Swedish man once filed a report on Facebook and allegedly reported to the Swedish police about an alleged sexual harassment from Tatelicious.  The man was brave enough to speak out about his ordeal.

Even by homosexual standards, his own husband had to walk away from the ‘marriage’ after he could not cope with the level of abomination. He did have sex live on Facebook with other men and claimed his husband allowed him, however, a few days later the husband left him.

There are countless allegations of how he is taking advantage of vulnerable poverty-stricken Zimbabweans by promising them visas to Sweden if they pay him money. If anyone complains that they paid money to him and the visas never came, he will threaten them and refuses to refund them because they ‘complained.’ But then again, I have no sympathy for anyone who gives their money willingly to him.

Even though he was born a man, he came on Facebook and announced to his followers that he was miraculously pregnant, and when in the process of time the bump could not show and everyone was asking him about the alleged pregnancy, he claimed to have suffered a miscarriage, insulting every woman who has ever gone through the devastation and pain of miscarriage.

My Boaz said to me, the interesting thing about Zimbabwe is that the more someone does abominable things, the more they are worshipped and adored. The one who tries to be a voice of reason is stoned and castigated. Good is seen as evil and evil is seen as good.

His many female followers bow to him in worship…

‘Oh ‘Tatelicious, our role model, our Queen. Teach us how to be women we pray.’

‘Oh our Tate, our free spirit. You doth inspire us much, show us again how to be women. ‘

‘Our Tate, Oh Hail Queen of Africa. There has never been an amazing Queen like you.’

Okay, I know I said I won’t take this article to church, but now I’ve changed my mind. I have to. As I am writing, this is getting rather spiritual, I feel it in my fingers, I don’t know what satanism looks like, but this man gives me the creeps.

There was a time I used to think he is harmless and funny, at that time I referred to him as a ‘she’. But now I know he doesn’t deserve the title of a woman, every time I see his shared videos on my timeline,  I cringe.

He still uses his testosterone when it suits him. He will scold and shout aggressively at women who are bold enough to stand up to him, and during that time when he is angry he will bring his male voice back and forgets that he’s supposed to be a woman. Obviously, if he comes head to head with a woman, he will use his male power over her. Isn’t it a man’s world after all.

His slogan to Zimbabweans is ‘makandikoshera’, meaning ‘you are so important to me.’ And now all the women chant to him in comments, ‘you are more important to us, oh Queen Tatelicious.’

Anyway, who am I to say all this, after all, I am just a woman who loves to write her opinions down. What a time to be alive hey.  I will leave it right there.